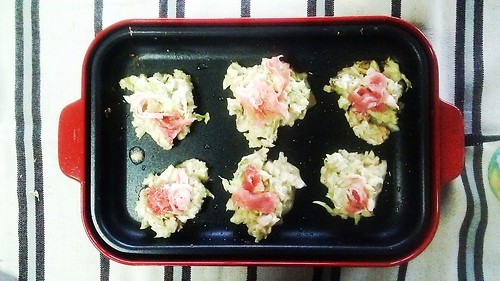 My students always 'translate' the name for Japanese foods such as that pictured above (お好み焼き) using their phonetization, "okonomi yaki," which might just as well be kowwash firdight for all the meaning it would impart to the average anglophone. This is I think because people hate meaninglessness (Heine, Proulx, & Vohs, 2006) so if at least one word in Japanese is included in any sentence the sender knows that at least that one word will be meaningful in a Japanese context, and that their conversation partner will have some idea of what they are talking about. The reasons for this is anatta or no self. The self is just a representation (story or image): something with a meaning. The lack of meaning is self-annihilation, and English conversation practice almost deadly. I need to be nicer to my students, investigate Japanese hospice praxis, while insisting that students use non-phonetic translations.

Addendum Good Paper on Japanese hospice praxis emphasises the use of image-based measure (PAC analysis) rather than scales. Recommends, in addition to palliative care and listen: smiles and improved personal hygiene and health on the part of the carer. I try to always attend conversation class wearing a business shirt and tie.
對馬明美, Tsushima, A., 三上佳澄, Mikami, K., 西沢義子, & Nishizawa, Y. (2010). 死を意識している患者との対話場面における看護者の態度構造に関する研究. 日本看護研究学会雑誌, 33(5), 33-44. http://www.jsnr.jp/test/search/docs/103305003.pdf

内藤哲雄1997／2002PAC 分析実施法入門［改訂版］「個」を科学する新技法への招待ナカニシヤ出版 amazon link a student gave a presentation about this. I thought it came from outside of Japan. 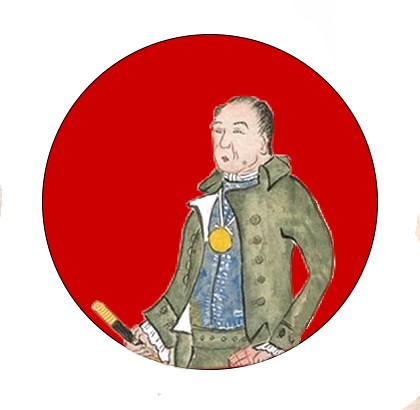 The Japanese very rarely brag (Heine, Lehman, Markus, & Kitayama, 1999), linguistically at least (Leuers = Takemoto & Sonoda, 1999). On the other hand the Japanese are "haughty" in their manner, posture and attire (Busk, 1841; Coleridge, 1872; Cortazzi, 2013; Golovnin & Shishkov, 1819; Krusenstern & Kruzenshtern, 1813). The Japanese eschew vocalising their superiority, which is left for others to do for them in flattery which, though void of linguistic meaning, as a form of obeisance is rife (Takemoto, in preparation).

Kōdayū (pictured above) spent 11 years in Russia as a castaway at a time when Japan was closed to the rest of the world. He returned full of "Western learning," and no doubt somewhat Westernised in manner, to obtain an audience with the shogun, the top man in Japan, about which Donald Keene writes,

"The shogun's questions were asked at random, and suggests that he was more interested in displaying his own knowledge of Russian than in learning new things from Kōdayū. The interrogation sometimes took the form: "There is a great clock in the castle tower of Moscow. Have you seen it?" Similar enquiries about the statue of Peter the Great and a famous Muscovian cannon were followed by, "Have you ever seen a camel?" (Keene, 1952, p.55)

The Japanese are not perfect. Looking, but not listening, with mother they expect to see those around them fawn and pay lip-service. Keene takes the shogun to task. I think that Kōdayū failed to flatter. Faced with such an ill-mannered subject the shogun had no choice but to ask rhetorical, self-answering questions for the purpose of self verification which is probably pan-cultural (Seih, Buhrmester, Lin, Huang, & Swann Jr., 2013) da yo ne?

Busk, M. M. (1841). Manners and Customs of the Japanese, in the Nineteenth Century: From Recent Dutch Visitors of Japan, and the German of Dr. Ph. Fr. Von Siebold. John Murray, Albemarle Street.
Coleridge, H. J. (1872). The life and letters of St. Francis Xavier : in two volumes. Asian Educational Services.
Cortazzi, H. (2013). Victorians in Japan: In and around the Treaty Ports. A&C Black.
Golovnin, V. M., & Shishkov, A. S. (1819). Recollections of Japan: Comprising a Particular Account of the Religion : Language : Government : Laws and Manners of the People : with Observations on the Geography : Climate : Population and Productions of the Country : to which are Pre-fixed Chronological Details of the Rise : Decline : and Renewal of British Commercial Intercourse with that Country.
Heine, S., Lehman, D., Markus, H., & Kitayama, S. (1999). Is there a universal need for positive self-regard?. Psychological Review. Retrieved from humancond.org/_media/papers/heine99_universal_positive_re...
Keene, D. (1952). The Japanese Discovery of Europe: Honda Toshiaki and Other Discoverers, 1720-1798. Routledge and Kegan Paul.
Krusenstern, A. J. von, & Kruzenshtern, I. F. (1813). Voyage Round the World, in the Years 1803, 1804, 1805, & 1806. C. Roworth.
Leuers = Takemoto, T., & Sonoda, N. (1999). The eye of the other and the independent self of the Japanese. In Symposium presentation at the 3rd Conference of the Asian Association of Social Psychology, Taipei, Taiwan. Retrieved from nihonbunka.com/docs/aasp99.htm
Seih, Y.-T., Buhrmester, M. D., Lin, Y.-C., Huang, C.-L., & Swann Jr., W. B. (2013). Do people want to be flattered or understood? The cross-cultural universality of self-verification. Journal of Experimental Social Psychology, 49(1), 169–172. doi.org/10.1016/j.jesp.2012.09.004 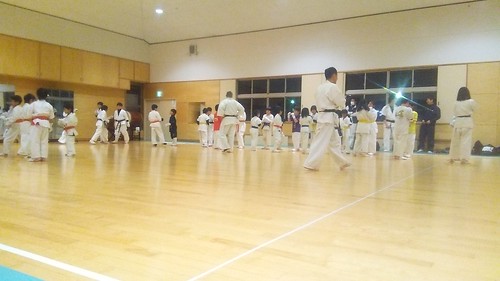 It seems to me that the key to Japanese culture is to realise that in the land of the rising mirror, the Japanese see themselves. This is evident in my opinion in the Japanese sense of private shame, Kyari Pamyu Pamyu eating eyeballs, Mariokart (Masuda, 2010), and birds eye view points in Ukiyoe (Masuda and Chang?) but above all, that this autoscopic ability may be closely linked with Budo and the Japanese arts.

At the moment however the only good reference I have for this is the theory of the eye apart in the 14th-15th century Noh actor and theoretician Zeami who says that repeated practice of Noh forms allows the creation of Eyes at a distance (Riken no Ken) that look back at oneself.

There is also a this book on the psychology of Budo by Takashi Ozawa (in Japanese) with a cover and belt (obi) that said that doing Budo one "obtains an other that looks at you" (but when I read the book and contacted the publisher it turned out that it was the publishers comment, rather than the author's). The cover image is great though.
Attachment 10901

Similarly also this "Onore wo mitsumeru" (Staring at oneself) in Japanese where Ryo Nagano claims that in Iaido one is always fighting, and seeing, an imaginary opponent and that eventually one realises that his opponent is oneself, thus Iaido is an autoscopic martial art.

And there is some research that a Kyudo practicing student of mine (Ikki Yamamoto) did that found that self-seeing or imagining correlated highly with archery ability (more than practice or anything else) since in archery as in Kendo, one is evaluated on form as well as lethality.

It could be argued that the strong sense of aesthetics or grace in Nitobe implies autoscopy.

The twofold gaze that Musashi Miyamoto in the Book of five rings does not mention autoscopy but it may well be especially "The Gaze in Strategy The gaze should be large and broad. This is the twofold gaze "Perception and Sight". Perception is strong and sight week. In strategy it is important to see distant things as if they were close and to take a distanced view of close things. " (近き所を遠く見る事 in the original) p14 "In large-scale strategy the area to watch is the enemy's strength."Perception" and "sight" are the two methods of seeing. Perception consists of concentrating strongly on the enemy's spirit, observing the condition of the battlefield, fixing the gaze strongly, seeing the progress of the fight and the changes of advantages. This is the sure way to win. In single combat you must not fix the eyes on the details. As I said before, if you fix your eyes on details and neglect important things, your spirit will become bewildered, and victory will escape you." p3 40 and on p23 "You must make the best of the situation, see through the enemy's spirit so that you grasp his strategy and defeat him." does not mean see using the enemies spirit but rather "look at the enemies heart" ("敵の心を見" in the original). Re-reading the final single page chapter on the Void, I wonder what I mean by "seeing yourself" because there isn't one! But still it could mean several things! 1) Imagining how one looks from the perspective of others. 2) Seeing ones self representations, such as mirror reflections and first person views as representations and therefore at a distance 3) Seeing the void, the non-self, in which these occur.

Judith Butler claims in "Bodies that Matter" that repeated (Derrida's "iterated") actions facilitate the creation of 'body as sign' which can be self-addressed, and be meaningful, "matter."

There is also work on the overlap between theatre ('dramaturgy) and martial arts but I would not wish to suggest that Martial arts are a *performance for others,* so I tend to steer away from things dramatological.

I do Karate a little and badly. I think that perhaps I may be able to see myself (with some pain!) more than than before. I don't know if Butler is right but it does seem to be, as Zeami can be read to say, that it is forms practice in Budo, tea, or 'radio exercises' (that all Japanese children do) that seems to be key. I find that doing forms in rows of other people helps in that I feel myself to be iterated in space as it were in the forms of the other people.

Do others know of any other sources regarding self sight, autoscopy, or "sight apart" in the martial arts? 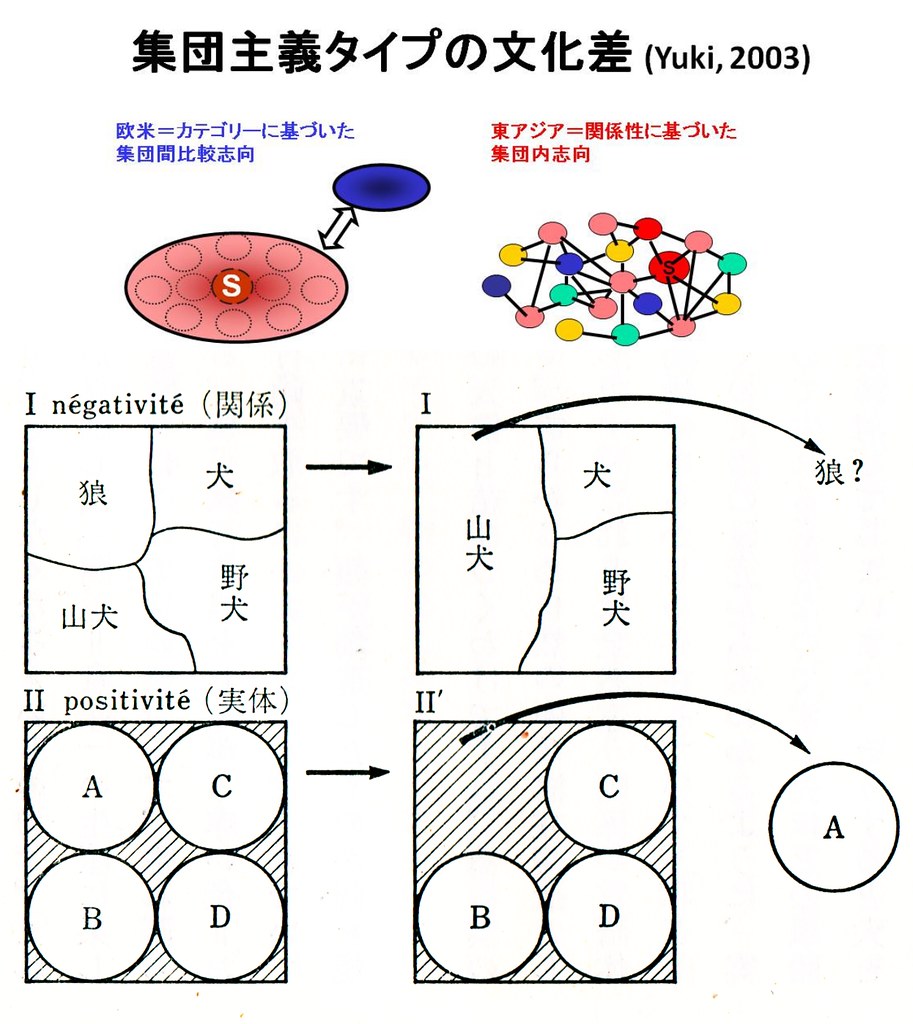 Possibly my favourite cultural psychological theory is that of Yuki (2003) who contends that westerners merge with their groups which they see in contradistinction to others, whereas Japanese form groups as networks conceived independently of any other group. This is a radical theory since if amplified it can be used to suggest that it is Westerners who are dependent upon their groups, whereas Japanese from groups in which individuality is nurtured. To a large extent I agree with this amplified formulation and have demonstrated that Americans though they may seem "individual" are all infact individualists, that is to say possessant of the same basket of culturally approved characteristics. None the less, I do believe that Japanese merge to a degree and that emphasis should be given to the way in which the selves in Japanese interpenetrate. Yuki (2003) in his diagram above shows the relationships penetrating the circles of the Japanese group members. I suggested a modification where the group members should overlap and explained the reason why they overlap - the imaginaire emphasises interdependence as explained here. Turning to Western groups however, it may appear puzzling that we find it so easy to merge with our groups, and require an outgroup to compare and disparage. One of the reasons for this is because, I believe, we cognise ourselves and our groups as narratives. Maruyama Masao illustrates the way Sassures theory of language implies that words can only be understood in their relation to other words. He contrasts categories of words with a box of coloured marbles (much like Masaki's asian group top right) which can be cognised even out of the box, and illustrates the way in which words can only be understood in contrast to other words with a box containing water with bubbles formed upon it. If a bubble in box is burst, if a language has no seperate word for wolf then that would be like bursting one of the bubbles (centre black and white diagram). Unless the word covers a meaning space in contrast to other words it has no meaning at all, whereas concrete (visible) things are what they are all on their lonesome. Japanese cognise themselves and their groups visually so they do not need to compare their groups with others. To love Japan they have no need of hating upon Koreans. Americans however tend to cognise themselves in linguistic terms, and therefore need a bogeyman-country with which to compare and enhance themselves. It is better in the light, but how to get there? http://flic.kr/p/DszxU2