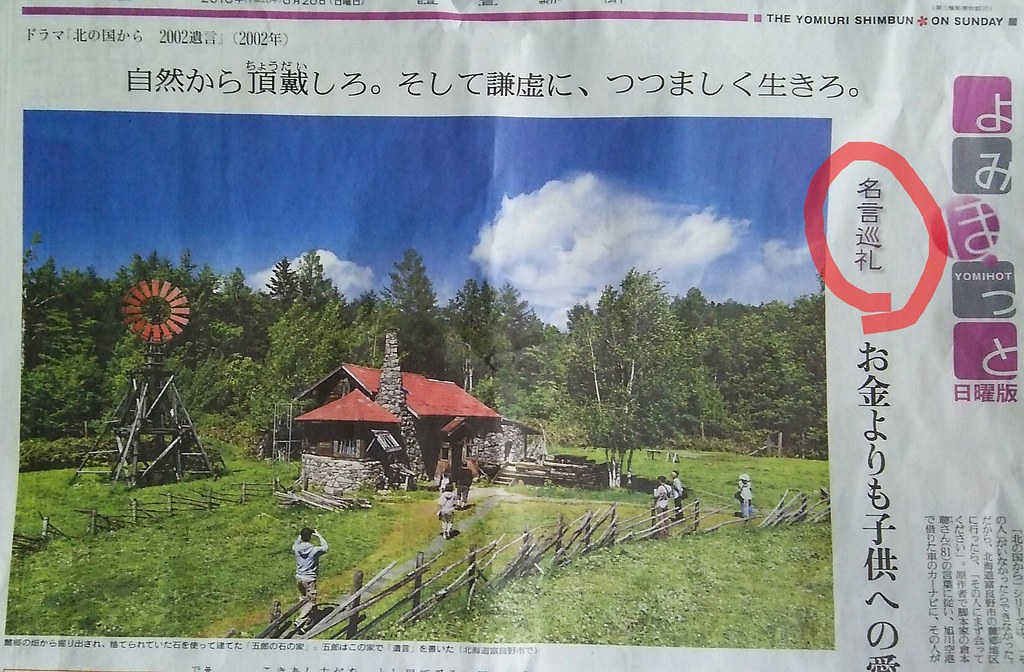 If the comforter watches but does not listen, then there us no objective "third person perspective" (Mori) so language is contextual, situated, out there, and one must travel to where language was uttered to understand it. The farmer who returned from Tokyo to his home town in Hokkaido, upon whom the famous Japanese television series, "From the North Country," (北の国から）is based, said "Receive from nature. Be humble". Japanese tourists, or sooth pilgrims, travel to where sooths were uttered, there receiving it, for that is where the sooth is. The Japanese world is not "inside out", as I have claimed, but has rather no inside nor out. The world is the sensations (Mach). The self is the world and the world is self (Nishida). http://flic.kr/p/JrF7Dt

Asian Holisim is Happier: And how happy are you? 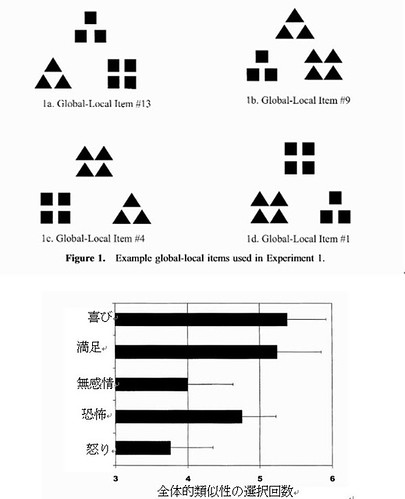 In each of 1a, 1b, 1c and 1d in the above image, which of the two (left or right) figures resembles most the figure above them? This is a test of happiness!

Subjects were then shown the four diagrams 1a, 1b, 1c and 1d above which show a single figure above two others and asked which of the two, left or right most resembles the one above. The right hand figure is made up of the same fundamental building block ■ or ▲, whereas the left hand figure is made of the opposite building block but is arranged holistically in the same way as the figure above.

It was found that the more positive emotions resulted in more holistic (left hand) resemblances as per the graph below (with the emotions in the same order as given above). This suggests that those that see the world holistically are happier and those that see it parts, may be in a more negative affective state.

Due to the higher suicide rate in Japan, and naff surveys purporting to guage the well-being of a nation based on one culturally laden question, one is often led to believe that the Japanese are bunch of unhappy people. I think this is very misleading. The higher suicide rate in Japan is due in large part to less negative appraisals of choosing the time and place of ones own death. It is further noted that East Asians in particular and Japanese in general tend to see the world in a more holistic way (Masuda & Nisbett, 2001; McKone et al., 2010). I think that this may be in part because the Japanese are in fact happier.

Does the Ladder of Life Exist?

The United Nations publishes a world happiness report based upon data from a Gallup survey, ranking countries according to their level of happiness. The Danes game out top. The Japanese were 53rd, one third of the way down the 150 or so countries, which is irregular bearing in mind their high GDP per capital with which "happiness" is shown to correlate.

It transpires however that the Gallup survey does not measure anything I recognise as happiness at all. The actual, and single, question that determines national happiness is as follows.

While the notion of a variety of lives, and the possibility of my being able to live any other life but the one I am living is a little fraught, it is at least imaginable. I might never have left the UK. I might have married someone else, etc.

As the famous song by Chiyoko Shimakura goes, people lead and we all could have lead a variety of lives. Life is varied. And by implication in the song, while life has its ups and downs, it is all good.

The notion on the contrary that these lives could be ranked and arranged in a vertical hierarchy with the "best life" at the top and "the worst life" at the bottom is far more difficult to grasp. It seems to me that certain negatives accompany positives (such as the envy of others with success), and positives with negatives (such as emotion, and humility with suffering).

That this imaginary vertical ranking of lives transpires to correlate - in most instances - with wealth may be because it is in fact encouraging respondents to economically appraise their own lives, ranking it in quantitative terms -- "I've done okay" "I've done well" -- in none other than in dollars and yen. In any event the suggestion that this one question plumbs the depths of national well-being or that it should be used to guide political policy seems to be to be quite absurd, especially in view of the way in which Westerners answer such questions in so unrealistically positive ways. But alas, this and similar measures are being used to inform political policy and the need for public spending. We are not high enough on the ladder. So, do we need to spend more?

The ladder of life does not exist so we should give up trying to climb it.

The above image contains a detail from a still from Chiyoko Shimakura's video for "Jinsei Iroiro" (Lit "Life Variety" or "Life has its Ups and Downs").

US Doctors are Harder than Salary Men 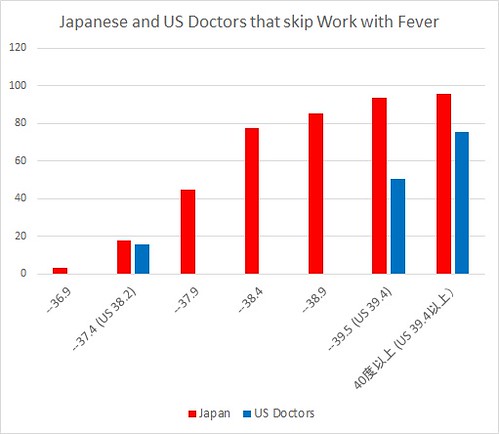 Or is that more selfish? In surveys of Japanese and US doctors asking whether each would go to work at various levels of fever the results were as given above, with US doctors choosing to skip work less than Japanese salaried men and women. Particularly at the 39.5 degree Celsius, 101 -102.9 (=39.5 degree Celsius) nearly twice as many salarymen choose to skip work as compared to US doctors. This may demonstrate that they are made of sterner stuff, or that they care a little less about infecting their co-workers and clients. Bibliography Truong, K. K., Huang, S. S., Dickey, L., Cao, C., Perret, D., Swaroop, B., ... & Gohil, S. K. (2015, December). 328Do No Harm: Attitudes Among Physicians and Trainees About Working While Ill. In Open Forum Infectious Diseases (Vol. 2, No. suppl 1, pp. S135-S136). Oxford University Press. http://ift.tt/22LfFlM オリスリス(2013) . 体温37.9度は高いか低いか。何度熱が出たら会社を休む？.マイナビスチューデント調べ. http://ift.tt/22LfkQ5 http://flic.kr/p/GZKpGz

The latest masked rider symbolic transformation item from the 2016 series Masked Rider Ghost (仮面ライダーゴースト） is called an "icon" using the characters for eye and soul (目魂). That the transformation item is some sort of symbol is common to all the transformation items of super sentai (power rangers), ultraman, masked riders, Mirrorman, Mito Kōmon, real members of totemistic tribes such as the Aranda, as well as the symbol collecting Japanese Shinto practitioners. The Japanese traditionally believed they received their soul vectored by a symbol received from shines in the form of shinpu, ofuda，or omamori amulet. Mirrorman, the closest to the Shinto tradition, would transform to his super form thanks to a shrine amulet, while standing in front of a mirror.

That these iconic amulets vector something supernatural from the country of light (Ultraman) is also clear. With this particular symbolic transformation item it is becoming increasing clear that these icons vector an "eye" or perspective such that their wearer or consumer may be transformed into the heroic suit or mask, representing visual appearance. One could only identify with a visual appearance by also internalising another. In the case of masked rider Ghost, these others are heroes such as Isaac Newton, Miyamoto Musashi, and the protagonist's father. Internalising the icon of the father allows the protagonists to internalise the father's eye. The "icon" as "eye soul" pun is Tsuburaya genius.

Another commonality shared by many transformatory symbols, such as Masked Rider Orz Medals, Masked Rider Ghost's Icons, and the Tjurunga or "bull roarers" of the Aranda (I made one) is that they are symbols that make a noise, as if reading themselves. If there were ever a visual symbol that could read itself it would 'prove' that the symbol is not merely formal (arbitrary) but an ontological part of a real world, and perhaps that there is of necessity a third person viewer to read it. Intrinsic icons that combine sound and vision, introduce that gap or distance into the world required for self sight. Icons that can read themselves do indeed therefore contain (or would if such things existed) "eye souls," the eye of the soul, that allow those possessed to transform into the seen.

These symbolic catalysts have the same, but 'Nacalianly transformed,' function as the Lacanian mirror image which is or appears to be a image that sees itself. The Lacanian mirror image, Superman's suit and indeed our own faces, is something that misguides or conceals our whispered identity, but it is also the condition for linguistic self-hood. The catalyst or condition for the linguistic world is that two things are the same. That is the importance of Jackson's red, all the images that Western pilgrims go to see, or the wafer in mass. They prove identity. The catalyst or condition for the visual world is that there is something that is two things, a symbol that reads itself, that can intrinsically be read. The Japanese need to prove an intrinsic distance. Westerners need to prove an intrinsic identity.

Both world views are magical but which is best? Keeping ones symbols on the outside, on ones forehead, or in ones watch or belt, is imho a lot more healthy.