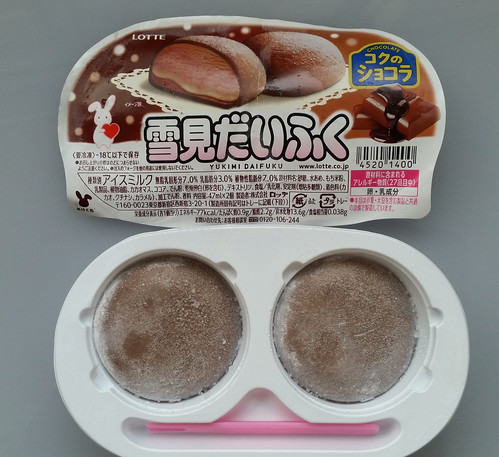 The white vanilla "Snow-Watching Very Happy" (Yukimi Daifuku) rice cake ice creams have been around since my wife was a child, or before. According to a Japanese press article, however, the chocolate ones were released on 31st August 2020. This is the first time I have noticed chocolate ones. The layer of rice is very thin. They contain 77 calories per cake.

The chocolate ones may have taken so long to be released because there is an association between rice cakes and the Japanese religion, Shinto, wherein rice cakes are use to represent the Sun Goddess, or her mirror, which looks very much like her, are displayed at new year, and are eaten in order to consume and or merge with her, so pure white rice cakes tend to be preferred.  But then grass (yomogi) flavored ones are traditionally available, and they are green, so perhaps not.

Are the Japanese Dirty or Not? 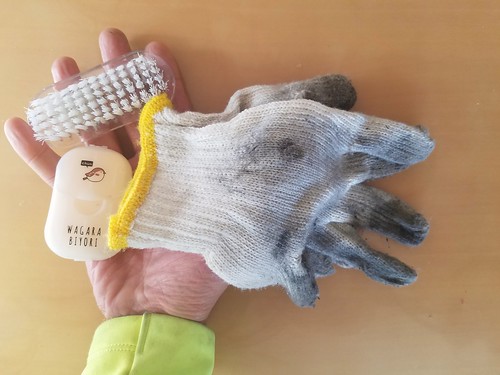 For about thirty years of living in Japan I thought that the Japanese were dirty because they did not have nail brushes (pictured above), before I realised that vast majority of Japanese do not get their hands dirty because they wear disposable cotton gloves (above right) to do dirty chores even when they are at home. I had thought that only taxi drivers, ticket inspectors and others that appear before other people wore these three for a dollar "soldier's gloves."

For even longer I thought that the lack of soap in Japanese public toilets to be a lapse in Japanese hygiene, and to a certain extent at least in so far as providing for ill-equipped foreigners it is, but then I realized that the fastidious Japanese have personal, portable dispensers containing sheets of one-use, "paper soap" (pictured above left) partly because they don't like to use bars of soap and dispensers that have been used by others.

I now use cotton gloves, and carry my own soap, so the lack of nail brushes, and soap in Japanese public toilets, no longer bothers me.

I still like my British  nail brush (purchased from China) to scrub my hands, however, in these times of pestilence.

Choice is a Chore 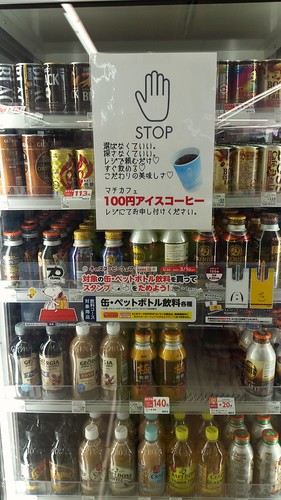 A poster in a convenience store promoting the store-brewed coffee over the wide variety of canned an bottled prepared coffee in the refrigerator, implying a negative, troublesome side to choice, which Japanese are more keenly aware of (Markus & Schwartz, 2010) but also leads to non-optimal outcomes in the West too (Schwartz & Ward, 2004).

My translation of the poster

No need to choose.
No need to search.
Just ask at the till ♡
You'll soon be able to drink  ♡
Our specialty taste ♡

High-street Cafe
100 Yen Ice Coffee
Please order at the till.

The second, transparent poster says that customers can collect stamps by purchasing the drinks in the fridge.