Rather than being "phono logo phallo centric" (Derrida) the Japanese are not so much animist (as they claim) but "Video Ergo Sum" (Lenggenhager, et al. 2007). This is due to the fact that the other of the Japanese is a gaze rather than an ear (Derrida). The Japanese mind is a mirror and the centre of gravity of the self is the face or "mask" (Wasuji). For that reason the Japanese have a fascination with photography and especially trick photography since if something looks like it is, then in a sense, it is. He I am photographed with Ray and May surrounded by "Photo Props" which are pieces of paper to change ones appearance in photos and are currently booming in Japan. Before the arrival of "photo props" of course, Puri Kura (Print Clubs) provided portrait photography post processing.

Stamped on their Person 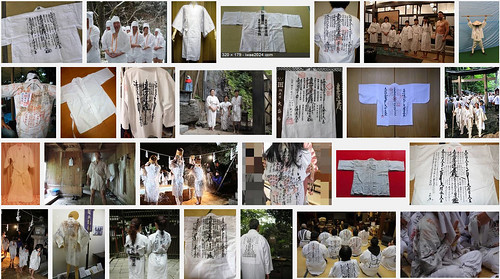 Why is it that we feel that each and every instance of a word has the same meaning, and can be copied perfectly authentically such as to make copies equivalent, and redundant? Answers to this question vary, but according to Derrida they all imply a "presence," either of some entity such as a metaphysical world of ideas (Plato, e.g. Theaetetus), meanings that are hard-wired in the brain (Pinker, 2007) , or because they refer to a shared physical world (Pierce, 1973). Others posit an ongoing inter-subjective presence, of God, the super-ego, super-addressee who understands words in the same way. At the middle ground between these two extremes is perhaps an awareness of usage: an abstraction from inter-subjective communication (Wittgenstein, 1973).

The Japanese may believe, as argued by Mori (1999), that words exist in the absence of any shared additional presence across iterations. Japanese words may lack both shared system and the perspective of a "third person" intra-psychic imaginary friend . Words are contextual and imbued with the subjectivity of the situation in which they were received. In this case copies of words are no longer redundant any more than are views of colours, flowers or sunsets. Words thus conceived are not authentically copyable, but need to be received.

When on pilgrimage, Japanese have traditionally collected words from spatially separate sites. These words do not sink into a system, nor are consumed by any internal friend. They are collected by having them stamped into cards, or books that pilgrims hang around their necks, or as in the above image, onto the clothes that they wear upon their person.

I am again reminded of Revelation 22:4. "There will no longer be any curse..." 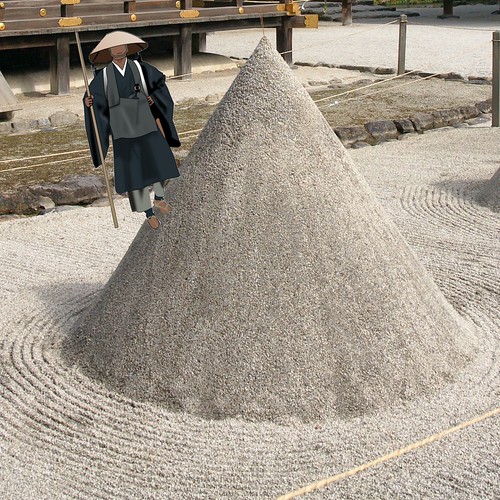 Edo period Japanese were fond of visiting Ise Shrine, other shrines and temples, and also famous mountains, none more so than Mount Fuji. However the purpose of visiting Mount Fuji was not to enjoy the view from the top, which as the saying goes is preferred only by stupid bigheads and smoke (baka ya kemuri ha takai tokoro ga suki). So instead of climbing the mountain, they more often chose to climb a model of the mountain, wearing full pilgrim's attire, at one of the shrines at the base of Mount Fuji (Ohwada, 2009, p. 40: quote in Japanese below).

There is no size information in the visual. A bonsai tree looks the same as a massive oak, and a model of Mount Fuji can look the same as the real thing. If you wear the right kit and walk up a model, then you might as well have walked up the actual mountain, because they will look the same way. In he land of the sun-goddess the authenti-copies or simulacra (Baudrillard, 1995) are not words, which Westerners feel to be perfectly copyable because we have a listening comforter, but visual replications such as of mountains in front of Shinto shrines.

Japanese culture is rife with authenticopies such as bonsai, model food in place of menus, dolls, horse and cow sculptures at shrines, masks, pictures of the deceased and his royal highness the emperor, and the god-head (goshintai) of the deities themselves that can be copied or split 'as one can split a fire' (Norinaga, see Herbert, 2010, p.99). The practice of visiting copies continues to this day in the form of creating foreign villages ("gaikoku mura") which fascinate foreign anthropologists and tourism theorists (Graburn, Ertl, & Tierney, 2010; J. Hendry, 2000; Joy Hendry, 2012; Nenzi, 2008). I don't think that they have noticed that the Japanese world is inside out yet, however.

If it were indeed the case, as argued here, that the Japanese world is that of light, an amalgam of images, seen and 'insured' by the watchful eye of the Sun goddess, then in order for someone to pass from Western to Japanese culture, from a Western to Japanese world, they would need to pass through the veil of perception. Perhaps all one really needs to do is find the dead girl that you are talking off to.

The above image is composed of a detail from the model mountains (though not of Mount Fuji) or standing sand (tatesuna) in Kamowake-Kazushi Shrine precinct by 663highland, and image of a monk in a straw hat from gatag copyright free image source.