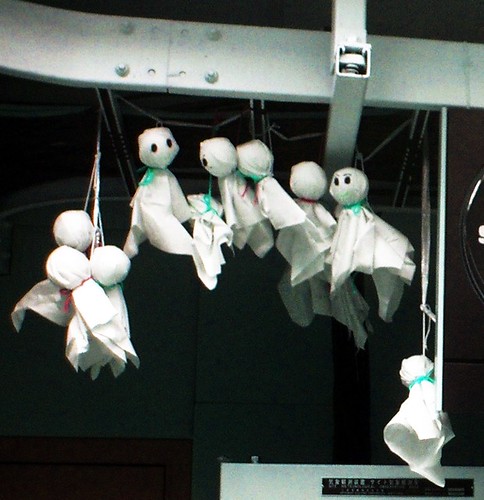 Japanese children are encouraged to hang "sunshine monk" dolls from the eaves for their houses before sports events or other days that they hope will be sunny. There is a superstition that this will cause the next day to be fine. But is it just a superstition?

First of all is should be noted that the Sunshine Monk, while having a sunny name, looks like a Japanese (and American) representation of a ghost. further, since they are hung by their necks from a point outside the home the distance of which is difficult to gauge, they present to the retina a scene not dissimilar to a mass suicide, of ghostly figures. Further still since "monk" (bozu) is also the name given to the age group of boys that typically hang the dolls, they may even present a horrendous image of mass juvenile suicide.

Humans associate warmth with love and cold with fear (Bruno, Melnyk & Völckner, 2017). In a related example of Japanese magic, the Japanese tell each other ghost stories on hot summer nights in order to reduce perceived temperature. It is reasonable to suppose therefore, and not difficult to demonstrate, that the sight of Sunshine Monk, come mass juvenile suicide ghost dolls, is enough to lower perceived temperature by a few degrees.

Perceptions of fine and raining weather are also influenced by psychology especially on the misty-drizzle divide. When is a day just misty, and when is it drizzling? Upon decisions such as these the perception of, and the actual existence of sport's days is controlled. It is further not-unreasonable to presume that a grey-zone in-between day be judged to raining if the weather is hot and inappropriate to precipitation, the existence of which is emphasised by the contrast with warm weather, and conversely such days are more likely to be deemed misty rather than rainy if the temperature is felt to be cold. Further If, from a Machian (1914) perspective, the world is our description and judgement of our sensations, then it is not preposterous to conclude that the hanging of sunshine monk dolls, really does bring judgements, and thus real days, of sunshine.

I think that also the fact that they are made of tissue, and under the eaves require quite a lot of rain to get wet, means that having a palpable test of wetness that remains dry again leads to judgements of fine weather. I can imagine Japanese mothers saying "Look the sunshine monk is dry, it must be fine weather," as they send their boys out into the "mist."

Image adapted from that of Novaric, CC share alike 3.0, commons.wikimedia.org/w/index.php?curid=1213271

Bruno, P., Melnyk, V., & Völckner, F. (2017). Temperature and emotions: Effects of physical temperature on responses to emotional advertising. International Journal of Research in Marketing, 34(1), 302-320.
Mach, E. (1914). The analysis of sensations, and the relation of the physical to the psychical. Open Court Publishing Company.