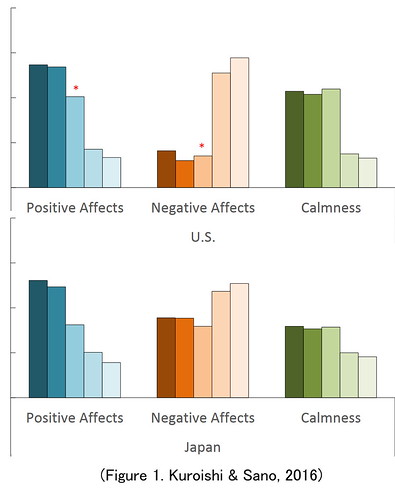 Professors Kuroishi and Sano are the doyens of normality research (Kuroishi & Sano, 2009; Sano & Kuroishi, 2009; Kuroishi and Sano, 2018). They rightly point out that the word "normal" has a positive connotation in Japan. In the UK and US however, to be called "normal" is far from positive.

As usual however, I claim that this is more about the ideologies present in Japan and the Anglosphere rather than the reality. Kuroishi and Sano (2016) seem to have provided evidence for this claim.

Kuroishi and Sano (2016) asked US American and Japanese respondents to imagine that they achieved better than, worse than, and about equal to their peers, and then asked how participants felt about their achievements. Participants were given a whole bundle of emotion words to evaluate, which the researchers subsequently separated into positive, negative and calm emotions.

They found that while in both cultures participants felt better when they had exceeded the norm, the middle, *normal* bar of the graphs shows that Americans feel better, less bad, and more calm about being normal, with the former two results reaching statistical significance (as indicated by the "*" but I am not sure of the exact level of significance it may be "**").

There are many reasons for this. One is that American big themselves up, linguistically, and say that they are feeling better than they would in fact feel, whereas Japanese may respond modestly saying how bad they would feel to only achieve normal results. I think, however, that the bundle of emotion words that participants were asked to evaluate may have reduced self-presentation effects, to achieve a far greater level of authenticity than asking questions such as "how do you feel about being 'normal'?" directly.

Another reason, I claim, is because, while individualism and collectivism exist as ideologies in the US and Japan, they do not reflect the reality, but rather due to the lack of each in the opposite culture, the aspirations of each population at a notional level. Yes, that is right, it is Americans who are more embedded in their groups, and the Japanese who have a greater degree of rugged individualism, to the extent that each hanker after the opposite characteristics.

At the level of their emotions, however, it is the Japanese who are driven to excel in their lived reality, whereas the Americans are, if anything, driven to spin positive words about their situation while feeling quite positive, or at least not negative and calm about being part of the American herd.

For further information and perhaps offprints, Professor Sano can be contacted at the address given on this poster