We Imagine Therefore We Think: The Modality of Self and Thought in Japan and America 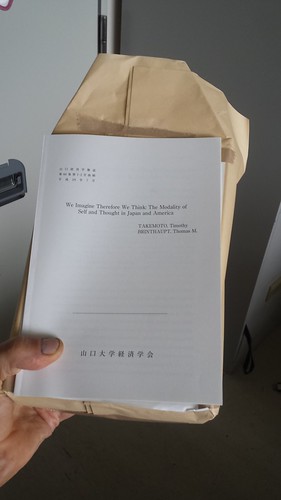 A brilliant Korean American researcher (Kim, 2002) found that self-talk improved American visual problem solving, and that preventing meaningful self-talk (by making the subjects repeat the alphabet) screwed things up, preventing Americans from solving problems. In East Asians however, she found that self-talk prevented visual problem solving, and that reciting the alphabet did not have a deleterious effect. She concluded that Asians are not thinking in language. We agree But Kim said little about the nature of East Asian thought.

In this paper we hypothesized that Asians do not talk to themselves but show themselves pictures or imagine. We call this a "Nacalian" (Lacan reversed) transformation and we give experimental data to support it.

Experiment 1)
We got Japanese to answer the second author's self-talk scale (Brinthaupt, Hein, & Kramer, 2009) (how much do you talk to yourself when….) and a modified version, the self-image scale (how much do you imagine things when…) and found that Japanese imagine more than they talk to themselves.

Experiment 2)
We reversed, or Nacalianly transformed, Kim's experiment (Kim, 2002), language for image, and found that imagination did not effect American subjects, neither for better, nor for worse if suppressed, but in Japanese imagining improved their ability to think up words, and repressing imagination prevented the same.

We argued that this lent evidence for our hypothesis that Japanese think by showing themselves images as oppose to talking to themselves.

We then discussed the implications for (A) the nature of thought and (B) Japanese culture.

A) Recently thought as self-speech has come under attack  (Freud, Left Brain Right brain work, Libet, Nisbett and Wilson) from evidence to show that the reasons that people give for their behaviour are generally bogus, and thoughts are generated after the decision making event. Westerners think our thoughts cause our behaviour, but they do not. "Thoughts are the product, not the process of thought". So why do we have thoughts? Recent psychologists such as Johnathan Haidt (who is brilliant) argue that thought is excuse preparation. We talk to ourselves so as to work out justifications for our actions to say to others. Thinking is for speaking they claim.

However, if Japanese are thinking in pictures, then this communicative theory of thought seems untenable, at least in the Japanese case, since pictures are difficult to convey to others. So what is thought for? We argue that Higgins (1996) notion of thought as a way of becoming emotionally involved and therefore motivated by ones actions is appropriate explanation for thought. Both talking to oneself and showing oneself pictures is a way of mirroring oneself, like standing in front of mirror, or standing on scales (c.f. “the weigh yourself diet”). If you represent yourself to yourself, you try harder.

B) The Japanese are seen as lacking in thought, self and individuality because researchers are always paying attention solely to language. But if you look at the Japanese, their houses, cities, cars, clothes, TV, behaviour, then you see that they are bristling with creative, innovative thought, and individuality.

Perhaps the offprints will be valuable one day! They are free now.

Hidden by Awe: Asian Positivity almost out of the Closet 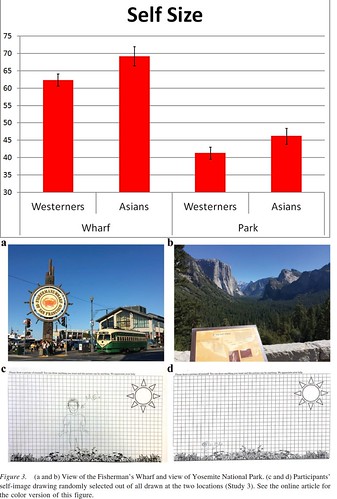 In recent research (Takemoto, 2017 in Japanese) I have argued that the size and positivity of self-drawings are a better measure of Japanese positive self regard that self-esteem scale scores and found that self-drawing size correlates with perceived social support in Japanese males, and that positivity of self drawing (as measure by independent evaluators) correlates with perceived social support in both Japanese male and female students, whereas self-esteem is not predictive of social support at all. In the vernacular, Japanese people who 'stand tall' with good comportment and positive, large body image are popular, but people with 'big mouths' and high self-esteem are not especially popular at all.

In a recent esteemed study (Bai et al., 2017), in the most impactful social psychological journal, a similar result was hidden in a paper on "awe". First of it reported that in an initial 7 item scale selection of self-size, where participants were asked to circle a self-drawing that was appropriate in size to themselves from large (like the above bottom left) or small (like bottom right) was found to correlate strongly with linguistic measures of, above all self-esteem (r=.64**), perceived power (r=.61), general self-efficacy (r=.5**), sociometric-status (r=.47**) and self-entitlement (r=.2**) but not with height nor weight.

The fact, however, that Asian perceived self-sizes, when measured with a self-drawing at least, were larger than those of Westerners hardly receives attention at all, hidden as it was in considerations of "awe," which Westerners are more sensitive to, in Yosemite Park for instance. May the Gods of social psychology forbid that Asians are ever found to be more positive than Westerners! The above graph shows the average number of squares covered by self drawings adapted from Table 2 (Bai, et al., 2017 p.6) where Westerners are the average of North American and European respondents.

The same pattern was found for the size of "signature" (me, 我, 私）but since this will depend upon the script only in-country correlations would be meaningful, and provides an interesting connection between Asian self-esteem and calligraphy.

For how much longer will Asian visual positivity remain hidden? It will not be long now. The problem then arises, if the self is both linguistically and visually represented, who is it represented to?

The bottom half of the above image is reproduced without permission from Bai et al., 2007, figure 3, page 10. Should you wish for me to cease and desist please leave a comment or drop me an email to the email link at nihonbunka.com 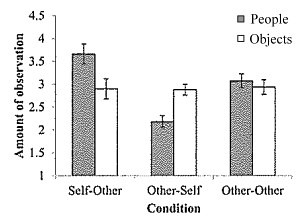 Recent research (Boothby, Clark, & Bargh, 2017) has found that Americans believe that everyone looks at objects about equally but that they observe others more than others do, and about twice as much as others observe themselves, even though this is not the case.

The authors termed this bias the "invisibility cloak illusion" since the data implies that we feel ourselves to be invisible, or indeed that we are invisible to ourselves as hinted at by some researchers (Smith, 1827; Rochat, 2009). This result is unlikely to be universal. Research by myself and colleagues (Heine, et al., 2008) has shown that Japanese are chronically visible to themselves at least in terms of simulated mirror images.

In other research we (Takemoto, & Imamura, 2001) have shown that schizophrenics are better at judging the size of their extremities than those without schizophrenia, judging hand sizes almost exactly at a typical 30cm viewing distance, and at 2 metres, whereas non schizophrenics judge hands to be 10-15% smaller than they are. This suggests that the bodies of schizophrenics at least are not invisible to themselves as also suggested by some schizophrenics (Pans Disease, 2017).

The misjudgement of hand sizes, but not bank notes, was found among Japanese participants who judged their hands to be up to about 15% smaller than in reality, possibly due to the fact that they identify with their mirror images, which they often do not see as being left-right reversed (Takano & Tanaka, 2007).

I predict that the invisibility cloak illusion (Boothby, Clark, & Bargh, 2017) will be absent among Japanese. Indeed the Japanese may feel that they are observed by others more than they observe others themselves. Further I feel that the researchers would profitably have asked two more types of question, "how often do you/others (simulate) observing yourself/themselves?" which would show a greater cultural difference being the lowest type of observation in the West, but perhaps having the highest reported/estimated incidence in Japan.

Image reproduced without permission from Boothby, Clark, and Bargh (2017, p. 9). Should you wish that I cease an desist please drop me a note in the comments or by mail to the email link at nihonbunka.com. 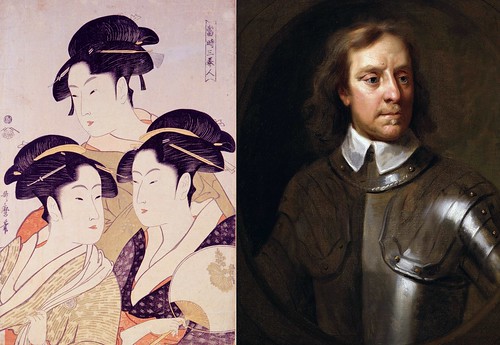 When Western pictorial art arrived in Japan in the late Edo period the Japanese were amazed at how photographic it was. One of the first famous Western-Style Japanese artists, Shiba Koukan, wrote

"What is remarkable is that it (Western Art) enables one to see clearly something that is actually not there. If a painting does not truly portray a thing it is devoid of the wonderful power of art. Fuji-san is a mountain unique in the world, and foreigners who wish to look at it can do so only in pictures. However, if one follows only the orthodox Chinese methods of painting, one’s picture will not resemble Fuji, and there will be node of the magical quality in it that painting possesses. The way to depict Fuji accurately is by means of Dutch painting." (Shiba Koukan see Keene, 1952 p.67)

The traditional Japanese painting, following its Chinese model, attempted to "delineate the spirit" (Keene, 1952, p.66) of the subject resulting in idealised or mangarized representations of "beautiful women" (bijinga) for instance. The women in Japanese biinga (above left) are as uniform as those in Anime, and the mountains in Japanese and Chinese art, sharing essence of beauty or mountain.

To Westerners however, the image is usually seen as superficial, "mere image," (Aristotle, see Brenkman, 1976) a fact which facilitates the pictorial representation of people "warts and all" such as in the famous picture of Oliver Cromwell, above right.

More notes
From Jay 1993, p13
Monotheistic religions, beginning with Judaism, have been deeply wary of pagan idolatry. The fictional character of artificial images, which can only be false simulators of the "truth," has occasioned distrust among more puritanical critics of representation. St. Pauls celebrate warning against the speculum obscurum, the glass (or mirror) through which we only see but darkly, vividly express this caution about terrestrial sign. Religious distrust was also aroused by teh capacity of vision to inspire what Augustine condemned as conupiscentia ocularum, ocular desire, which diverts our minds from more spiritual concerns. These and like suspicious have at times come to dominate religious movements and dictate long-standing religious taboos. Mose's strugge with Aaron over the Golden Calk, the Islamic rejection of figural representation, the iconoclastic controversy of the ieghth-centruy Byzantine church, the Cistercian monasticism of St. Bernard, the English Lollards, and finale the Protestant Reformation all express the antiocular sub-current of [Western] religious thought. In fact this hostility remains alive today. in the worl of such theologians as Jaqcues Ellul, whos Humiliation of the Word, written in I981, reads like a summa of every imaginable religious complaint against the domination of sight.