Why is it that we we feel ourselves to be watching a screen from inside our heads? We feel ourselves to inhabit the blackness in front of the light. One reason for this is because we talk to ourselves and, and possibly something else, in the this darkness. It has been demonstrated that East Asians are far less likely to engage in self speech at least while attempting to solve problems (Kim, 2002). Further Japanese deities and arguably the other of the Japanese self is felt to be something that watches from without (Heine et al. 2008). I notice that some of the best of them such as Naruto and hachimaki headband wearers may even have their names, or marks, not inside them, but upon their their foreheads like Rev 22:4. None of this muttering in the dark for them. In Japan the names are out there. I think that Japanese engage in tourism to "named places" to remind themselves of this fact.

The Japanese are Westernising furiously but it seems to me that the next stage in human development should be for the world to become Japanese, who are "meek" to boot. Bowie developed a mark for his last record. He nearly got there.

Image is drawn by me but the character is copyright Masashi Kishimoto, Hayato Date and Shueisha.

Bowie was my first hero, when I was about 13 or 14, and now 35 years plus later, he remains my last. Now, after his death, and watching three of his last (Valentine's Day, Lazarus, and Blackstar) it seems to me that David Bowie was Japanese. I had always suspected it.

The sixties themed pop tune "Valentine's Day" has been argued to be a critique on gun violence (or the glamorisation and sexification of guns) since it starts and ends with the Charlton Heston pose (0:05 3:01, as above, guitar raised like a gun), shadows looking like a gun, guitar used as gun, bullet flying across the frets, his aiming and shooting of a make believe gun, the shadow of his guitar changing to that of a gun both during the Heston pose, and later in the song at 2:24 where the shadow of his guitar turns into a Tommy gun such as was used in "Valentine's Day Massacre".

There may be clues in the names. There were at least two massacres on Valentine's Day. "Teddy and Judy" may be gun shooting victims (I can find no real ones) or a reference to the pair in The Kinks "Waterloo Sunset" to which perhaps this song has a resemblance. Mr. Valentine is sometimes referred to as Johnny Valentine in an interview with a co-creator.

Someone else in the YouTube comments suggests that Valentine's Day may be about death in general which seems quite plausible to me, especially since the shadows behind Bowie sometimes seem to be that of a grim reaper (1:54) reaping Bowie (2:54).

The rest is my, rather off the wall, take in which I agree that the song is about death, but a self inflicted death, and possible rebirth.

First of all the Charlton Heston pose is also Heston's "my cold dead hands" pose: the pose of death.

I note that when Bowie sings about the face and hands of Mr. Valentine he is also showing us his own face (e.g. 0:55) or looking at his own hands (2:06 2:38), so I wonder if he may be referring to his own visual image which is icy and, like all images, dead. Our self images are also surprisingly "little" like Mr. Valentine (as one can convince oneself by drawing around the image of your face in a mirror, I think that this is why Noh masks see below are small).

This song reminds me of the first lines of his first pop video where he refers to himself as being small, and loving this image till a certain day "Love you till Tuesday"

Bearing in mind that Bowie is double, from the cover of Pinups and Hours, the smiling Asian Zaphod to whom he is conjoined at the head in "Where are we Now" and there are dead female eyes in all our minds, as claimed in Blackstar, Valentine's visual image may be paired up with the eyes. I.e. we love ourselves as images with the eyes of another in our minds. [ In this regard, I wonder if Bowie fell in love with his wife partly due to her name Iman, I man, eyeman, his Eve see below. ]

I claim that this is the structure of the Japanese self: the eye or mirror of the other Amaterasu and their face or "mask" (Watsuji). Usually Westerners however narrate themselves (Freud, Mead, Bruner, Bakhtin, etc) so the eyes in Blackstar would ordinarily be effeminate ears (c.f. Freud's "acoustic cap" "bonnet" or Nietzsche's ears, or Derrida's "Ear of the Other"). I think that Jones, Major Tom, Bowie, Ziggy, the Thin White Duke and Mr. Valentine had a tendency to narrate himself in the 3rd person, and identified with his image.

From this perspective we may be killing ourselves as we live, making a a dead image of ourselves, "falling to earth." Our true being is our consciousness but we believe that we are in the black hole that we believe to be in front of our light. Instead of living as our being, as the white star, we are turned inside out. In this situation death, "Valentines Day", or (Love you till) Tuesday, when we give up on that love affair, may conversely be life, a rebirth. Bowie may be alluding to this possibility in Lazarus.

The Biblical representation the eyes or ears in our heart may be Eve a comforter made out of our hearts, who we can replace with Jesus, or Amitabha for instance.

I should like to do a Bowie Pose, when I am reborn. I should be so lucky.

Urry (2002) , (Turner & Turner, 1995) and others persuade us that Western tourism is sightseeing: gazing upon things. I have argued elsewhere (40,000 views and zero comments. I took it off the Net!) that this gazing may in part be a form of reconstruction (the focus of Derridean Deconstruction) after the model of Mary, Jackson's fantasy (1986) that had never seen red. When Mary sees red for the first time we are persuaded by philosophical dualism: of (1) an ideal scientific world, in our heads and in spooky things in themselves, and (2) chimerical mere phenomenal like red. Mary's word "red" and the description of Frenchness in a guidebook, unaccompanied by qualia is like all the other castrated signs that Derrida (2011) argues Western philosophers parade before us (writing, speech acts, foreign words, indicative signs) before showing us the full dual sign and meaning in that moment when e.g. Culler's tourists (Culler, 1988) find a Breton wearing clogs and pronounce upon her. Behold! Frenchiness (it wasn't just a world but a Platonic ideal)! The Japanes have a tendency to go on tours with out looking. One commentator (Araki,1973, p10 below) bewails their tendency to get on trains and busses travelling through magnificent scenery which they ignore. The book above (Mori, 2014) has a "belt" telling potential purchasers that it will tell them the "hilstorical truth" of the protypical pilgrimage, the "Shikoku Henro" tour of 88 temples: a truth that pilgrims who walk the route will not be able to see. The temples themselves are above all named, possed of stamps, that pilgrims press on on a pad that they carry around their necks. Japanese pilgrims such show on the book belt, or such as monks in various blindfolding straw hats (above right), and Japanese travellers in pallanquins (top left) also have a tendency not even to try to look at the scenery. Travlling is about going to places of historical truth, picking up names rather than gazing at images. Japanese tourism is conversely about being seen. Japanese tourism is sightseen, *auto*photographed. Tatsuno (2001) writes that after completing the Henro pilgrimage he becomes, like Mario, able to see his own back. To (re)construct a Japapnese self one can practice a lot of set moves in a Japanese art, or visit a lot of named places on a set route picking up names. In either case one develops within oneself the eye in the sky of the Other. The tendency to collect names and engage in other Japanese tourism practices shows a negative correlation with feeling autoscopic, like Mario. So perhaps, when Japanese stop feeling like Mario, and need their autoscopy topped up, they cover their eyes, and go on tour. "歩いたあとは自分の後姿が少しは見えてきた。" (Tatsuno, 2001, p.3) http://ift.tt/1Sye6ph 私は旅しながら考えていた。。。日本人にとって旅とはいったいなんなのだろうか。指定車のの中である。車内は団体客でほぼいっぱいであった。賑やかな一行を乗せて列車は宮崎へと向かっていた。盃（さかずき）を汲み交わすもの手拍子で変声を張り上げるもの、通路を左往右往するもの、等々。 だが、その喧騒をよそに左手には昼下りの陽光をきらめかせながら春の豊後水道がのびやかにひろがっていた。窓外いっぱいに溢れるめくるめくような瑠璃色の空と海。－この壮麗さと無関係な旅が、いったいどうしてありうるのだろうか。。。車内のだれ一人として窓外に目をくれるものがなかったからである。(荒木,1973, p10) Culler, J. D. (1988). The Semiotics of Tourism. In Framing the sign. Univ. of Oklahoma Pr. Derrida, J. (2011). Voice and Phenomenon: Introduction to the Problem of the Sign in Husserl’s Phenomenology. Northwestern Univ Pr. Jackson, F. (1986). What Mary didn’t know. The Journal of Philosophy, 83(5), 291–295. Retrieved from http://ift.tt/1ZCX5JA... Turner, V., & Turner, E. (1995). Image and Pilgrimage in Christian Culture (0 ed.). Columbia University Press. Urry, J. (2002). The Tourist Gaze. SAGE. 森正人. (2014). 四国遍路 - 八八ヶ所巡礼の歴史と文化. Tōkyō: 中央公論新社. 辰濃和男. (2001). 四国遍路. 東京: 岩波書店. http://flic.kr/p/CMt7xX 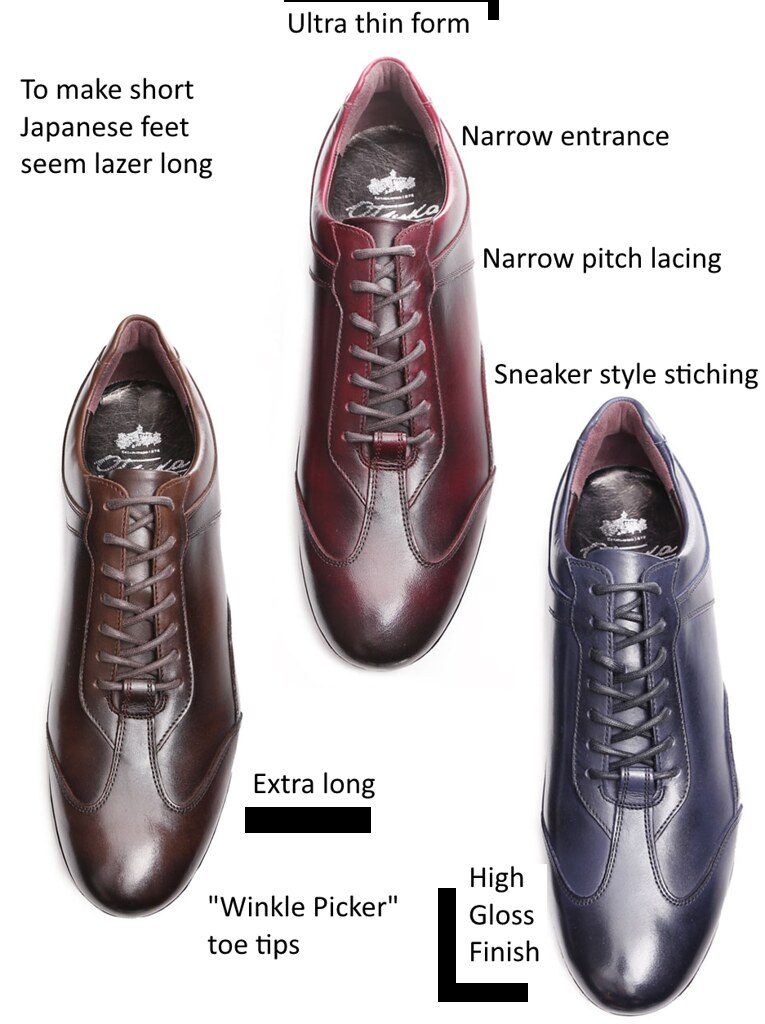 These Ostuka Lazer Sneakers are designed, I believe, to make Japanese feet - which are generally shorter than those of European descent - seem as long as a laser beam. They are long in the forefoot before the start of the laces and end in empty winkle picker toes. The laces, though they start higher on the foot, have a narrower pitch and also end higher on the foot to make it seem that the wearer is positively L shape. The whole shoe is as narrow as possible, in sporty sneaker style, but accentuates itself by the use of high gloss leather. These Japanese semi formal sneaker shoes are trying to tell us that their wearer has a body like a ballet dancer, with style, reserve, and finesse.

The Japanese are masters at visual self-enhancement. When you next meet a self-deprecating Japanese man, look at his feet.

You may also notice that he is standing in a Yohei pose to emphasize the thinness of one of this thighs.