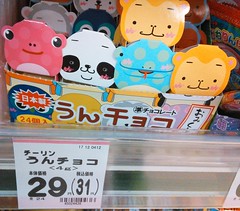 These chocolate treats are called Unchoco the "un" of which is a pun on the "un" of luck or fortune and the "unch" of "unchi" or poop. The connction with turds is emphasised by the fact that the chocolate treats, in three colours, are dispensed from an orifice in the posterior of a variety of origami animals. Children are encouraged to devine their fortune based on the colour of the chocolate stool, and then eat it. 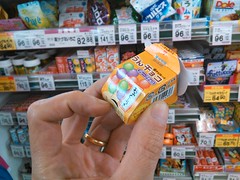 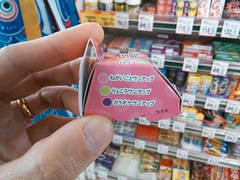 Young children the world over probably share a fascination with faeces, but in the West this fascination is repressed out of them. The relative lack of taboo on nakedness and sex, in Japan, encourages no ill feeling towards things elow the belt. Rice farming encouraged the Japanese to see faeces as a valuable source of fertilizer. Hence compartive research shows that the Japanaese are able to talk about the size and consistency with their parents. This confectionery also exemplifies, the Japanese fascination with cute things, and the small quantities in which they consume sweet things; the treats weigh only 31 grams (about one ounce) in total.

The Japanese version of "Let it Go," the theme tune of the Disney blockbuster feature length animation, Frozen, is great. The coming out of the 'Snow Queen', or Snow Woman, is also a lot more pertinent in Japan where women, rather than 'gentlemen', are meant to be the perfect, repressed, guardians of the secrets and the horror that holds Japanese society together.

In Japnaese legend, Snow Woman (Yukionnna 雪女) is the Japanese equivalent of Dracula. She, Sadako,Barutanseijin (バルタン星人）, and many other Japanese monsters kill their victims by freezing them or drag them into images, mirrors, developer liquid, or reflective pools of water. I interpret this to mean that these female monsters return their victims to the world of the image, which since the Japanese have "mirror stage" selves, is all the Japanese ever were. The woman that looks from within, most prototypically Izanami and Amaterasu, must remain hidden for the Japanese to keep being how they are.


﻿My Japanese children were terrified. I had to take one of them (May aged nearly four) out of the cinema crying. The rest of the cinema goers, where I saw it in Japan, were enraptured with almost no one leaving the theatre until the very end of the credits.