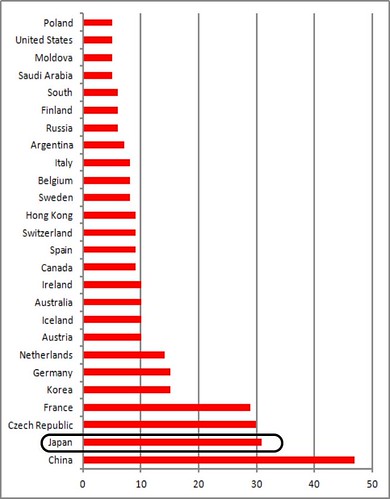 Most analyses of Japan behaviour argue that there are quantitative differences due to the lack of individualism or greater collectivism of the Japanese. Thus, I feel sure that the the risk aversion of Japanese has been explained in terms of their desire not to stand out because, as we are always being told, "the nail that stands out gets hit."

When it comes to "risk taking behaviour," this usually refers to behaviours which result in physical harm to the body. Since the Japanese identify with their self-image, damaging their bodies is something that they are very averse to doing. The risky behaviours highlighted by Guzman and Pohlman (2014) : "Self-Injurious Behaviours, Violence, and Suicide, Substance Use, Risky Sexual Behaviour, and Behaviours Related to Obesity and Unhealthy Dieting," are all of this type. The Japanese avoid all of these risks.

Indeed the very definition of taking risk (doing dangerous things) usually relates to the lack of aversion to bodily harm so perhaps it is the case that the Japanese are generally less risk averse.

Fortunately there is a category of risks which the Japanese are prepared to take: those that relate to spiritual harm. According to Freese (2004, p88) "A clever and intriguing hypothesis in the sociology of religion is the idea that irreligiousness is analogous to other forms of risk-taking, and so variations in risk preferences play an important role in understanding variations in religiousness."

And at least according to Pascal, being religious can be considered to be a sort of insurance for ones soul. In this instance, the Japanese are found to be second only to the the Chinese is in their irreligiousity with 31% of Japanese claiming to be atheists. The Japanese take great care of their bodies, because they can be seen, but a large proportion of them care very much less about their soul since, at least on a naive view, it can't.

Again it should be noted that the Japanese claim to be atheists but involve themselves in a wide range of religio-cultural practices, such as shrine visiting and hiding their thumbs. In other words the Japanese are fairly happy to take risks when it comes to their lack of a linguistic avowal of some sort of creed or religion because no one is listening. But they are risk averse (as I found out with a survey) when it comes to skipping out on a shrine visit to praying for the health of their three, five, and seven year old children. Japanese behaviour thus appears to be paradoxical until one realises that what matters is how things appear, not what people say.

There should be many other linguistic risks that the Japanese take, at least if only by omission.

Image based on data from the Global Index of Religion and Atheism.

Comments:
I think you omitted the most interesting piece of information from the survey. Where Japan really stands out is in the percentage that answered "don't know" or gave no response at all (23%). No other country even comes close. I'm curious to know if you have any thoughts on why that might be?

Thank you very much indeed for your comment.
Being really weird, I would like to claim that I have never seen a *thing*, any *thing*. All I have ever seen is a, this, big ellipse of colour and light: a visual field, that I guess you see one also. I can posit "things" in it, but basically I am mixing or rather attempting to mix words with the big ellipse of light. The Japanese live in the light and are less likely to pronounce upon it: "there is this" "there is that." There is only the big light. Being more aware of the light, the Japanese are less likey to pronounce this way or that upon anything. Words are so much fluff. If you give them an "I don't know" category then whatever the survey thre will be loads of Japanese who prefer it. i guess.

Or put another way, the Japanese don't spend all that much of their time thinking in words. For proof please see the excellent paper
Kim, H. S. (2002). We talk, therefore we think? A cultural analysis of the effect of talking on thinking. Journal of personality and social psychology, 83(4), 828.https://www.researchgate.net/profile/Heejung_Kim5/publication/11086438_We_talk_therefore_we_think_A_cultural_analysis_of_the_effect_of_talking_on_thinking/links/00b4951925606e0109000000.pdf


So each question comes as a novel requirement to think in words, and reach a linguistic conclusion about non linguistic attitudes held until then. These non linguistic attitudes are difficult to grasp so "I don't know" is the enevitable response. Others are much more likely to have thought of the question, or one similar, and its response already and so be able to respond immediately.