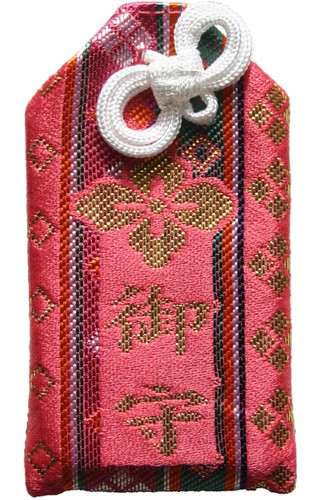 For instance, it is thought unlucky for a woman to enter a tunnel construction site, for fear of offending the spirit of the mountain. There are other superstitious prejudices

Many Japanese carry talisman (omamori) and other good luck charms such as that pictured above.

A modern one is, if a couple go on their first date to Disney land, in Tokyo presumably, then the couple will split up Similarly modern sounding is if you pierce your ear and a white thread appears from the hole, then if you pull it you will go blind.

New shoes should be worn (for the first time?) in the morning. I am not sure why but one website claims that it is to discourage people from venturing out at night.

The number 4 is unlucky since it is pronounce in the same way. as the word for death. The number nine is also similarly a homonym. for suffering. These numbers are therefore often avoided in hospital and hotel room and floor numbering systems

The number of strokes it takes to write the kanji in ones name. determines ones luck. This site in Japanese allows you to find. out if any particularly surname, given name combination is lucky. or unlucky. We consulted it when choosing the name of our son. www.naming.jp/

If you whistle at night a snake, ghost or monster will come and get you. Originates in the time when there was slavery in Japan and one would attract a trader (to whom one might sell someone) by whistling at night. Thus children were taught to avoid whistling. at night by stories of snakes and ghosts. This was the 3rd most popularly believed superstition among Japanese men and women in 2006.

There are many superstitions related to the Chinese calendar. and various regular unlucky and lucky days related to Buddhist. 'six day' interpretations of the calendar. A calendar related superstitions that seems to have been widely believed is that females born in the year of the fire horse (every sixty years, last time 1966) will turn into devils and cause suffering to their husband and children. The birth rate nominally declined by 25% in the last Fire Horse year, perhaps partly because those born early and late in those years are registered as having been born the year before or the year after.

Children who go to sleep with their shoes on will die before their parents (or at least that is what I think it means - literally, "will not be present at their parents death"). Apparently this. originates in advice for over protective parents, especially. considering that children use their feet to control their body. temperature so they are better off without nocturnal foot covering.

People who cut their nails at night will die before their parents. Perhaps this is because of the danger of cutting ones self. in the dark and getting an infection. There is also a pun. on "night nails" and "shortening ones time" both rendered Yotsume or Yodzume. This was the most popularly believed. superstition among Japanese men and women in 2006

If you eat seaweed such as wakame and konbu (typically. included in Japanese soups) then you will get more hair. I guess that his originates in the slight visual similarity between thick black Japanese hair and seaweed. I can vouch for the fact that this superstition is untrue, since. I like both wakame and konbu but my hair has fallen out

A cold will get better after you have given it to one hundred. people. Perhaps this is one reason why the Japanese are. particularly keen to wear masks when they have colds. The. mask prevents them from giving their cold to others. If they. did not wear the mask then they would not just be careless, but thought to be selfishly trying to give their cold to one hundred people so as to cure it. This superstition was particularly popular amongst men (4th most popularly) rather than amongst women (9th most popularly believed)

If you hiccup one hundred times you will die. Perhaps this was. a way of getting rid of the hiccups since it is know that concentrating on something (such as a counting task - typically counting backwards from one hundred) is likely to cure ones hiccups

If you see a hearse you should hide your thumb (your parent finger) lest your parent or a relative should die. This is surely partly due. to the pun on thumb (parent finger) and parent. This was the 2nd. most popularly believed superstition among Japanese men and women in 2006

There are many superstitions related to puns and the power of words. It is bad luck to say "go home" or "split" at a wedding lest the bride. or the couple should do just that.

If pull out white hair then you will grow more. This may be said in other countries, and may not originate in Japan

If a tea stalk (a bit of tea) comes to the surface in your tea it is good luck.

Stupid people do not catch colds. This may be a way of consoling. people with colds - at least it proves you are not stupid.

It rains when cats wash their faces.

If you dream of a snake you will get rich.

Snakes are generally. connected with money. People put snake skins in their wallets. Finding a snake skin around the house is a good thing.

People. born in the year of the snake (like myself) will not trouble for money, apparently.

You should not sleep with your pillow to the North since this is the. way that the dead are laid to rest so that their soul knows to go. in the right direction. I am not sure where (I would have thought to. the West since that is the direction of the pure land, but...)

You should not kill a spider that you see in the morning or night. I think that it may be reincarnated relative that has come to watch. over you. Perhaps

It is unlucky to eat eel and pickled plums (ume boshi). Both. eels and pickled plums are strong tasting salty foods. If one. had the sort of rich taste in food to want to eat both eel and. pickled plum in the same meal then one might have a blood. pressure problem

If you lie down straight after eating then you become (as fat as) a horse. Is this a superstition or just common sense?

Similarly common sensical is that yawns are infectious. They. really are, even among humans and pets.

Something that happens twice will happen a third time. A lot. like the Western superstition about bad/good things coming. in threes

If you make 1000 origami cranes (birds) then you will be cured. of disease. This superstition was made famous by the attempt. by Sadako Sasaki, an 9 year old girl at the time when, at home one mile away from ground zero, an atom bomb was dropped on. Hiroshima. At age eleven she developed leukaemia and made. 1300 cranes from medicine wrappers and scraps of paper, before her death at the age of 12. Her story became famous. with the publication in 1977 of "Sadako and the Thousand
Paper Cranes" by Eleanor Coerr

Next ones are a little bit sexual, so do not read on if you find that. sort of thing offensive The only 'superstition' mentioned in the Wikipedia article directly. related to Shinto is that preventing women from entering certain. places, particularly tunnels. The reason being that the god of the mountain, ("yama no. kami") would be annoyed to have another female entering her 'tunnel'. There are many places which women. due to their being defiled are also not allowed to enter such as. behind the sushi bar counter (the fish would rot), a Sumo wring. (the subject of some controversy), the baseball dugout and some. sacred mountains,

If gentlemen or boys urinate on worms then their penis will swell up, and probably not in a good way (judging from the kanji)

The above was based on these Japanese language pages.
Excellent large scale survey of most commonly believed superstitions. according to sex. www.fgn.jp/mpac/sample/__datas__/impacter/200607_29.html.
Wikipedia article on superstitions. ja.wikipedia.org/wiki/%E8%BF%B7%E4%BF%A1
Blog article about superstitions. www.mix-up.jp/sakana/archives/2006/02/post_168.html