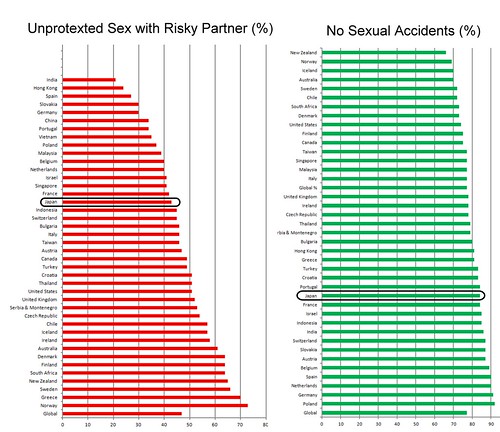 The Japanese rate themselves to be the most risk averse nation in the world with more than 70% of Japanese saying that they are NOT someone who enjoys taking risks (World Values Survey). I believe that the differences between Japan and other developed nations are qualitative rather than quantitative so there should be some area of Japanese behaviour in which they are shown to take risks. I think it unlikely that they would say that they enjoy taking risks since this would be similar to standing out in their linguistic self expressions - something that they have no interest in doing.

Eating blowfish and getting on roller coasters are both not very risky behaviours when compared to skydiving (the 5th most dangerous sport after BASE jumping, swimming, cycling and running).

Guzman and Pohlman (2014) highlight the following classes of risky behaviour among youth worldwide: "Self-Injurious Behaviours, Violence, and Suicide, Substance Use, Risky Sexual Behaviour, and Behaviours Related to Obesity and Unhealthy Dieting." Only suicide is clearly elevated in Japan but that is a special case of risky behaviour. I am not sure that self annihilation is actually "taking a risk," but may on the contrary be a way of avoiding risk, and heightening certainty. The only other risky behaviour on that list that might be high in Japan is risky sexual behaviour.

However, Japanese sexual behaviour does not appear to be all that risky. While no where near as risk averse as their self rating would appear to indicate, the Japanese are below the global average (47%) of percent of adults who have had unprotected sex with a person whose sexual history one is unaware at 42%. And the Japanese have better than the global average (77%) of persons who have never had a sexual accident, my term for unwanted pregnancy or sexually transmitted disease, at 84%. Both sets of data are from the Durex World Sex Survey (2005).

So where is Japanese risky behaviour?