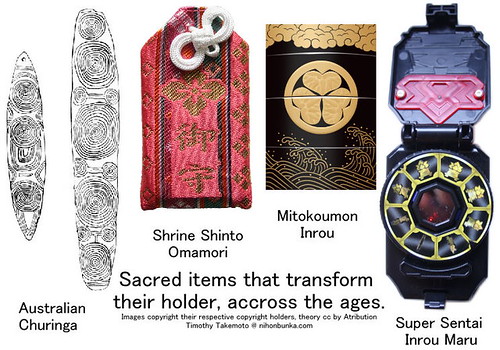 I noted in a previous post that the history of transofmatory items (変身アイテム) such as used by Ultraman (pens and glasses), Super Sentai (Power Rangers), Sailor Moon, Himitsu no Akko-chan, and Kamen Riders (Masked Riders), has a history in the transformatory symbols of Mitokoumon, Touyama no Kin and Samurai Momotarou. Japanese superheroes are always flashing a special symbol and transforming by means of its use.

The history is much older. I ague that Shinto is a geographical totemism, like that of the Arunda/Arunta/Arenda of Australia. In totemic religions the faithful recieve totemic badges which represent their owners and the ancestral spirits of their ancestors. The Arunda of the central Australia destert are one of many such groups found worldwide. Unlike most totemic religions, but in common with the Japanese, these "most primitive" (Freud, Durkheim) of totemists believed that the totem was associated with a place.

That the japanese recieve totemic badges from Shinto shrines almost goes un-noticed. More visible are the symbolic, soul containing badges that are given to the dead (mitama, Ihai). However, as Yanagita Kunio points out, once upon a time, there were "ikimitama" symbols given to the living. These were originally leaves branches of sacred trees and rocks from sacred mountains. They were believed to give their bearer life and were recieved from the time of first shrine visiting.

However in my view, and as Yanagita hints, the symbols were gradually replaced by kanji ideograms and piece of paper.

Yanagita writes, "in this reigion also the Nusa (gohei, zigzag strips of Shinto paper) were originally I think to be distributed among participants. This is similar to the leaves and branches of Japanese cedar and nagi (a evergreen tree/shrub) that were given to the faifthful from sacred trees on Mount Inari and Mount Ise" (Yanagita Kunio Collection No. 14 p 51, my translation.)

These days Japanese still recieve omamori or amulets from shrines that are said to represent a stand-in or self-replacement and protect the bearer from bad luck and impurity.

Before we call the Japanese primitive bricoleurs, let us not forget that "in the beginning was the word," and that I have a "Christian name."Am I transformed by it?