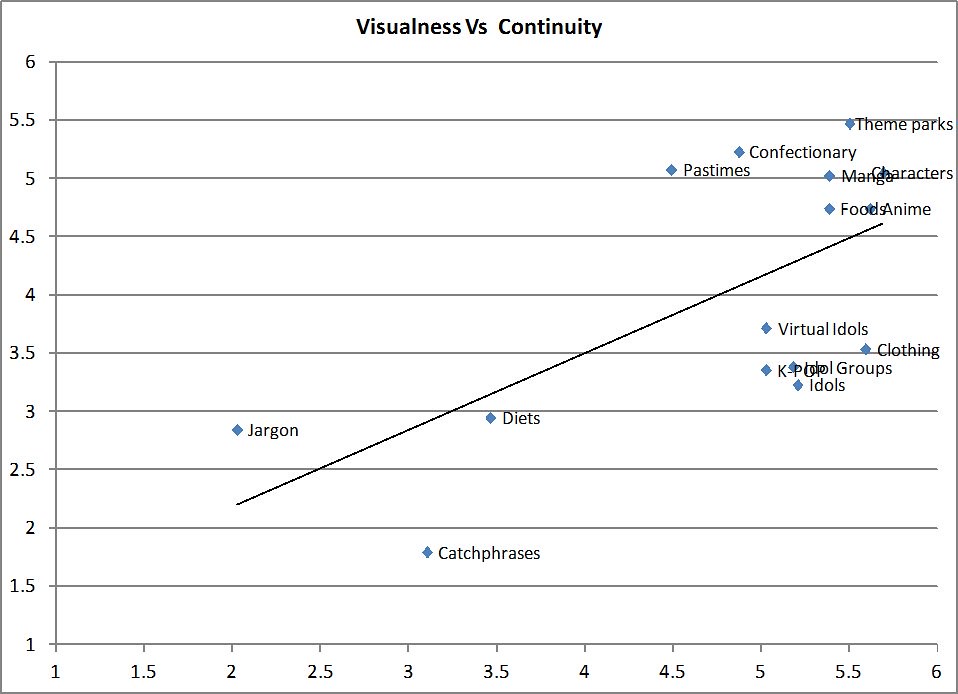 The late great Donald Ritchie wrote an incisive but somewhat disparaging book about Japan in which he claimed that Japan is an "Image Factory," forever churning out fads and fashions. It seemed to that part of this is true. Japan is very good at manufacturing images, in the form of Anime, manga, characters (such as Kumamon or Kitty), architecture, and all the manufactured things from cars to cameras that Japan prides itself in. But on the other hand, I do not believe that they are in the slightest bit faddy or merely a fashion. Since Aristotle Westerners have argued that the voice, narration, ideas are the vector of identity and the soul whereas images are mere images, the stuff of fads and fashions. This is a Western prejudice.

In Japan continuity, identity and soul resides in the visual and my seminar student, Masaki Abe (2014) appears to have proved it. In an initial experiment we asked for social phenomenon that have longevity and continuity and those that do not, those that are faddish. In a second experiment, subject were required to rate these phenomenon according to the extent to which they were visual and had continuity. It was found as predicted that there is a strong positive correlation (r=0.64) between visuality and continuity in Japan.

Jargon included also "modes of speech" such as speaking like a posh person, and was considered, along with diets, and the catch phrases of comedians to be the most faddish phenomenon there are. Maruyama Masao claimed that this faddishness extended to theories too. Perhaps my theory will have its day.

Hello Kitty, a recognisable face and little more, is 40 years old this year.