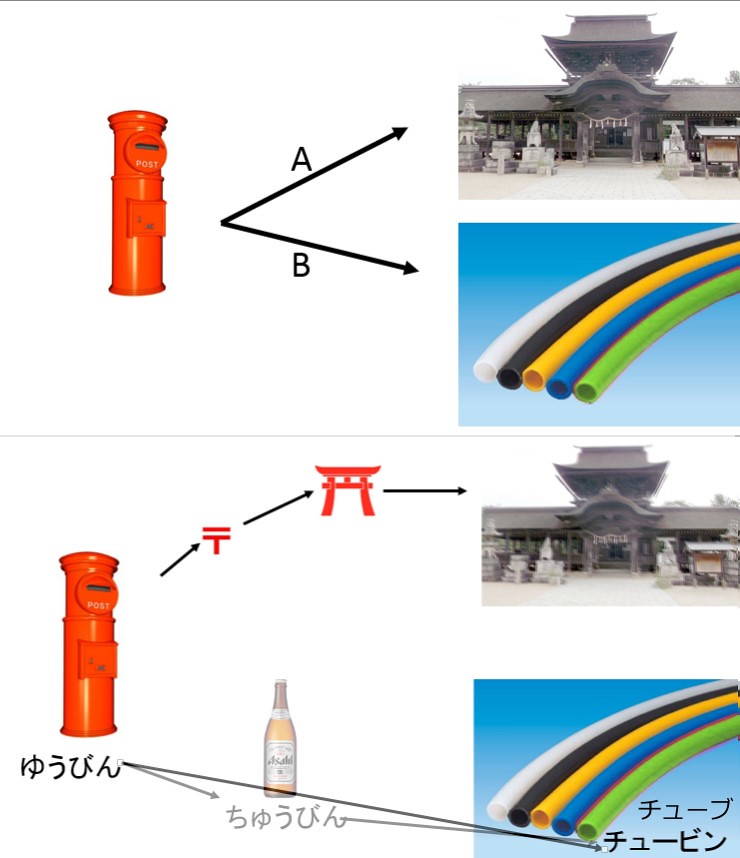 The Japanese Hate Puns
I used to marvel at the fact that one of the most famous brands of watch in Japan is a pun on coitus (Seikou) among a variety of other things. To the Japanese it is not the slightest bit notable nor amusing. There are too many homonyms and puns in the Japanese language for anyone to find them funny. Meaning is expressed by pictorial characters more than phonemes and many of these characters are read with the same phoneme so unless one calls to mind the character the phoneme is polysematic by itself. Making sequences of assocations to test the hypothesis is very difficult to make associations that do not run along more than one, both linguistic and visual, line. The linguistic association post box (yuubin posuto) to some tubing (chuubin) either vian a mid sized bottle (chuubin) to tube (chuubu) or not, could also be made visually and directly due to the fact that a post box is tubular. I am not sure if anyone else would associate the post office mark with the mark for shrines. And the post box could be associated directly with the shrine as both being associated with the Japanese state: as an instantiation of what was Japan post and the Japanese state religion. In any event, punning associations are likely to be weak in Japan. Japanese people generally just cringe when jokes are attempted with puns. Images from the Google image search. お取り下げご希望の場合は下記のコメント欄か、http://ift.tt/2doaLKR