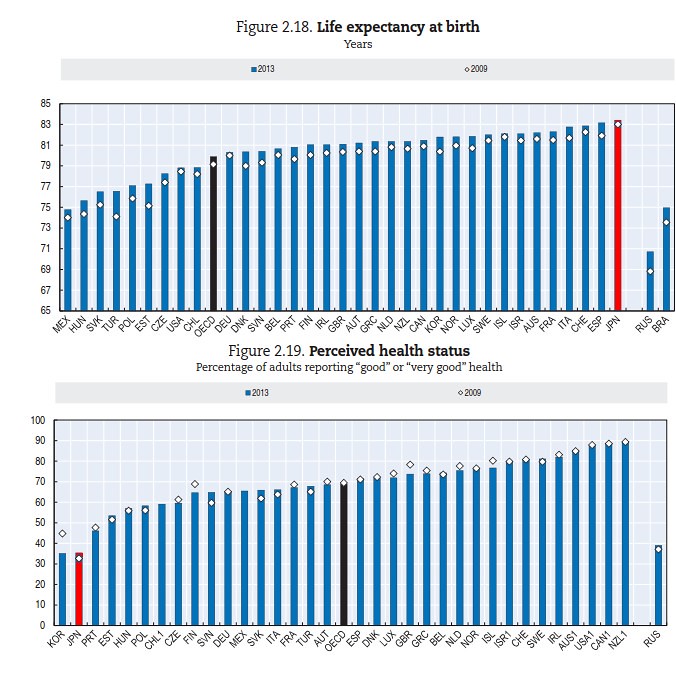 Life Expectancy vs Health: A Liars Paradox
It is quite difficult to get objective data about the well being and health of a nation. In research on perceived well being (Cummings, 1998) based upon Licket scaled linguistic tests developed by Diener (Diener, Emmons, Larsen, & Griffin, 1985), the Japanese are found to be among the most unhappy people in the world. There are a number of reasons for this. The reference group effect (Heine, Lehman, Peng, Greenholtz, 2002) encourages respondents to compare themselves to their ingroup peers, so if those surrounding the subject are happy it is going to be difficult to rate oneself as of above average well-being or happiness. And further, while Asians tend to be humble, Westerners tend to "self-enhance."

Alas however, despite the lack of reliability of self-report measures, the prime minister of Japan (Abe, 2013) is alarmed by the fact that Japanese children do not, like American children, self-report that they are "proud of their country. The lack of pride of the Japanese is seen as cause for concern.

But the results to these self-report surveys should in my view be ignored. One of the most obvious ways to out the lack of veracity of the self report data is to compare life expectancy with self-reports of health. The Japanese have the highest life expectancy of any country in the OECD survey, but together with their Asian neighbour, the lowest response in rates of "good" or "very good" in answer to "“How is your health in general?”

That 35.4% of the Japanese report themselves to be in the top two categories of a five point scale is within 4.6% of the level that it should be assuming realism and an honest, parsimonious, even distribution of people responding with each of the five categories. More than 80% of people from the top four anglophone countries, however, find it meaningful to say that their health is "good" or "very good". What does "good" or "very good" mean to these people? It is clearly not an expression of the true state of their health. I suspect it is self encouragement, or auto-eroticism as Derrida (1976) likes to call it. In the Christian tradition pride was thought to be the origin of or equivalent to sin（Hastings, Mason, & Pyper, 2000) but these days positivity is king.

All these self-report scales should indicate is that the Japanese do not lie about their happiness and health. Alas there are many Japanese who believe the data, and believe that they are as a nation, living a long time in poor health compared to other nations. Concerned at these results Japanese children, and adults, are being encouraged to rate themselves more positively. The whispering is being imported to Japan.