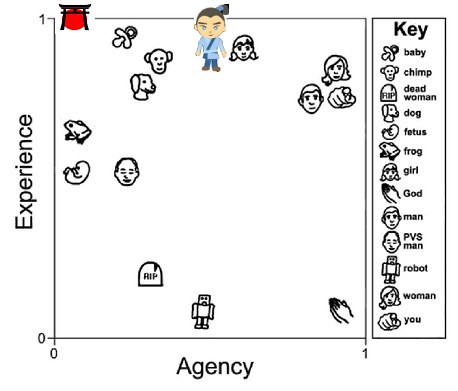 Is the mind of a robot, dog, or God something that (1) experiences pleasure and pain, and or (2) has agency in the sense of having the ability to 'think and plan'? Western respondents situated the abilities of their own other minds as shown in the image (adapted from Wegner and Gray, 2016, p7) above.

At the recent International Association of Cross Cultural Psychology conference in Nagoya, professor Yoshihisa Kashima introduced research (Kashima & Bain, 2016) using criterion for mind similar to that of Wegner and Gray (2016).

It seems to me however, that the Japanese see mind in a different way. The Japanese are famous for not planning but reacting to their environment so I think that that they would rate their own minds, according to these criterion, somewhere near the mind of the Western girl (see blue Ninja in the diagram above, added by me). Japanese deities are perhaps 'pure experience' (Nishida, 1992; see shrine gate and mirror icon added top-left by me), only acting when asked**. Japanese deities do not try to interfere, but watch over and protect the Japanese. Their protection is intentional but this intentionality is reactional, and not planned. The 'divine wind' that was felt to protect the Japanese from Mongol invasion was reciprocal to the launch of the Mongol invasion fleet. The watching and protecting (mimamoru) deities have no intrinsic intention to sink ships, but at the same time the ship sinking was quite deliberate.

Planning, future-intent, agency and analytic thought are things that occur when humans are unhappy. Humans whisper to themselves about a better future that they would like to get. The Japanese, being a happy lot, do such analytic thinking a lot less often. The Japanese use their minds, which are at one with their bodies (Yuasa & Kasulis, 1987) for other things.

In particular the Japanese minds use their "mirror neurons" to attend to the behaviour and bodies of themselves (Takemoto, 2012; Hino, 2016) and others. Japanese thinking and agency is typified by a form of visual, atemporal yet spatio-intentional visual attention and intervention, expressed by such words as "omoiyari" (do-thinking, where think, omou, takes a visual object), "kikubari," （share out spirit) "mekubari" (share out one's eyes), and "kitsukai," (use ones spirit). As a group these modes of Japanese thought might be termed 'proactive sympathy'.

Notes
*It is apt that the diagram above includes the mind of a "dead woman" in view of the fact that the Western mind is inhabited by a dead woman (Abraham & Torok, 2005; Derrida, 2005).

**This is not entirely true. Some Japanese deities intentions in the sense of teleological propensities. Aragami, or wild spirits, such as Susano no Mikoto, do act bringing about calamity unless they are appeased and pacified. Japanese leave rice and rice wine at their shrines. Since Yahweh is felt to be pure intent, and encourages His followers to sacrifice not rice or sake, but themselves, is He the ultimate 'wild spirit'?