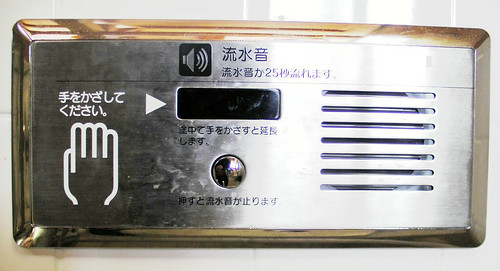 The sound princes or oto-hime is a device for hiding the sound of ones excretions, which emits the sound of running water. It is made by the Japanese manufacturer Toto. Usually only available in women's toilets (hence my inability to take this photo so far) this one was in the disabled persons toilet. The sound continues, it says, for 25 seconds during which time the user would hope to finish their 'ablutions,' which, disguised by the sounds of running water emitted from this device might not have existed at all.

Since the beginning of time, according to Japanese mythology, the Japanese have endeavoured to hide the desire, sexuality, and nature of women so as to raise the feminine (or castrated feminine) to the level of 'social principle' (Kawai, 1982) or role model.

An as a result all the Japanese to a man, aspire to be a nice kind harmonious watashi a first person pronoun used by men and women, originally only indicating, the woman.

To this day the desire, sexuality, and nature of women is so taboo, so off limits, in Japan that Japanese women: read pornography only about men having sex with men; do not use tampons, use toilets hidden further than those of the gents, laugh behind their hands, wrap themselves in layers layers and of underwear, never suffer from flatulence, almost only use the back-channel in mixed-sex conversation, only moan "no," and use electronic sound-emission devices, such as that shown above to disguise and hide the terrible tinkle or splash.

And I mean terrible. When Japanese women show their true nature, they can often wither Japanese men with a glance.

The noise of the sound princess, and many of the other important meaningless noises emitted by Japanese culture (politician's crooning, sports-persons' shouts, Buddhist chants, pachinko cacophony, mid-day and evening come home Tannoy's, supermarket endless tapes, and New Year's temple bells) may have structural similarities with the Biblical fig leaf and the veil. The sound of the sound princess is a audio cover of female desire, as opposed to a visual cover of male desire.