Don't Do It: Preventing Suicide East and West 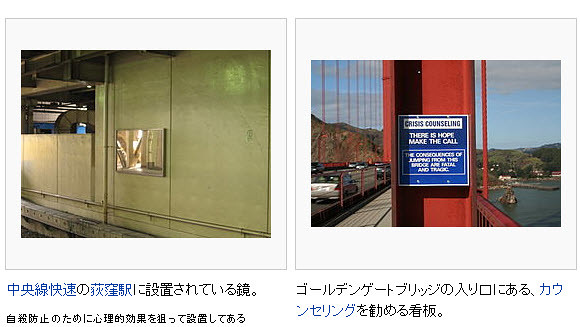 Typically, in Western literature the former, linguistic self awareness is privileged. Mead, the father of social psychology, argues that speech necessarily demands of speakers to hear themselves from the point of view of their listeners (plural), giving rise to the 'generalized other' (Mead, 1967), 'super-addressee' (Bakhtin,1986), 'Other' (Lacan, 2007), and 'impartial spectator' (Smith, 1812). Typically Western theorists argue, by application of common sense I presume, that in order to see oneself however, one needs a mirror. Mead writes "If we exclude vocal gestures, it is only by the use of the mirror that one could reach the position where he responds to his own gestures as other people respond" (Mead, 1967, p.66).

However, the recent discovery of 'mirror neurons' (Iacoboni, 2009a, 2009b) , the concomitant neural capability of 'autoscopy' (Blanke & Metzinger, 2009; Metzinger, 2009) and our own work demonstrating that the Japanese, but not North Americans, have "mirrors in their heads," (Heine, Takemoto, Moskalenko, Lasaleta, & Henrich, 2008) demonstrates that Mead's common sense assumptions about human inability to see themselves without a mirror is incorrect. Humans, especially if properly trained through the Japanese arts (Zeami; see Yusa, 1987; Ozawa, 2006) can activate their mirror neurons and hone their ability to learn to see themselves, just as Westerners can and do develop their debating skills and hone their ability to hear themselves from others' and then, importantly, the Other's objective point of view.

Cultures differ in the predominance of each type of self awareness. As we have seen, the Japanese have an ability and proclivity to be aware of themselves visually. This is demonstrated likewise by the tremendously positive way in which they portray themselves visually with their poses, fashion, and automatically corrected "puri-kura." That Americans are predominantly aware of themselves in the linguistic domain is, even if one does not believe theorists such as Mead (1967), Bruner, Lacan (2007), Hermans and Kempen (1993), Ricoeur (1990), Derrida(2011), McAdams, Bakhtin (1986)** to name but a few, adequately demonstrated by the way in which they have a strong and robust desire for positive linguistic self regard. All the studies showing positive self regard on the part of North Americans and and equivalent lack on the part of Japanese, for instance, are linguistic. The only studies to demonstrate a greater or equivalent positivity among Asians are visual: auto-photography (Leuers = Takémoto see Mukoyama, 2010, Ch.1), collage (Leuers = Takémoto & Sonoda, 2000), briefly presented flash cards (Yamaguchi et al., 2007), and positivity in recollection of photos.

What happens when the non-culturally preferred medium of self-awareness is promoted?

Among Westerners it has long been known that, unless they are feeling in a good mood, Mirrors tend to promote a novel mode of self-awareness making them aware of failure to meet social norms (Heine, Takemoto, Moskalenko, Lasaleta, & Henrich, 2008; Sedikides, 1992). The negative impact of mirrors is all the more pronounced when Westerners are in a state of negative affect. It is hardly surprising therefore that, as demonstrated by recent research (Selimbegović & Chatard, 2013), mirrors increases thoughts of suicide among Westerners. And, yet, mirrors are used as a means of preventing suicide in Japan (Oshimi, 1992).

After more than two decades of economic stagnation, the level of suicide in Japan has reached historic highs. One way in which Japanese railway authorities have found effective in reducing the level of suicide by jumping in front of passing trains is to install mirrors on platforms. Mirrors are the culturally familiar mode of self-awareness in which the Japanese have learnt to self enhance. To see themselves as loved, lovable, even cute. Remembering the internalised gazes of their loved ones, the Japanese look at the mirror, see the side of themselves that they still love, don't do it and go home.

The equivalent stimulus for increasing positive self regard among Westerners has long been known - provide them with a telephone, a listening ear, and an opportunity to narrate themselves. Hearing ones self speak is enough to put your average Western, but not East Asians (Butler, Lee, & Gross, 2007, 2009; Butler, 2012), in a better, not a worse, mood.

As recent research (Selimbegović & Chatard, 2013) indicates, increase in the incidence of suicide might arise however if mirrors were situated on the Golden Gate Bridge, or I suggest, if suicidal Japanese were encouraged to narrate themselves***. This last possibility does not seem to be one which Japanese medical health professionals, even Mukoyama (2010), seem to have considered.

The image above is from the Wikipedia page on Infamous Suicide Spots, showing the suicide prevention mirror on the the platform of Ogikubo Station's Central Line, and a "Crisis Councelling" telephone on Sanfransisco's Golden Gate Bridge.
Inspired in the first instance by (Selimbegović & Chatard, 2013)

Notes
* This is the way I (and perhaps Derrida) see self speech, as a sort of self touching, self-comforting, auto 'hostipitality.'
**I know that I am ignoring Cooley and Goffman. It seems to me that the latter, and those that base there analyses on Goffman's approach such as McVeigh (Wearing Ideology) come closest to the position that this blog espouses but, in Goffman's and McVeigh's case at least it seems to me that their dramatological, 'looking glass self" is 'presentational.' That is to say that the Goffman and McVeigh (if not the Cooley)  'looking glass self" is an image of me for you, for another specific other. And this is the nub of the matter. The Japanese too hear their self speech from the ear of otherS but they lack the "generalized" (Mead, 1967), "super" (Bakhtin, 1986) Other (Lacan, 2006) and they have, and we lack, a generalized gaze of the world.
*** Based on Western practice, the Japanese have taken to situating telephones at suicide spots. It seems possible to me that a telephone to the Japanese is a bit like a mirror to Westerners. A telephone encourages people to narrate themselves, and in Japan that, among those that have debt, interpersonal problems, encourages them to narrate themselves negatively in the absence of Eve, a generalized other, super-addressee, or ear that loves them. I know that there is some (though very little) OSA research that uses voice, but I suggest that a telephone is a Nacalianly transformed mirror.