Survive the Pandemic by Turning Japanese 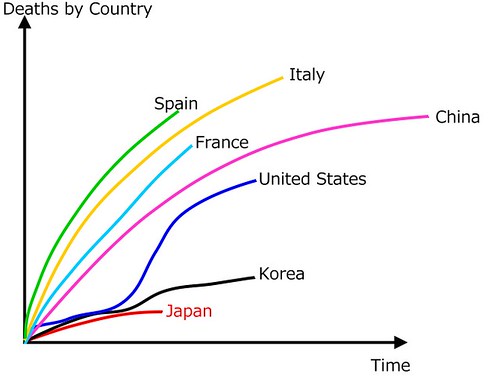 Here are some of things that may have helped the Japanese to have suffered fewer deaths in the coronavirus pandemic so far include perhaps (I am not connected with medicine):
1. wearing face masks which have been de rigueur for those who are suffering from respiratory illnesses perhaps since the influenza pandemic of 100 years ago,
2. a greater attention to covering ones mouth when one coughs (Japanese ladies cover their mouths even when they laugh),
3. far less dancing and discos,
4. bathing in the evening when arriving home dirty rather than the next morning (having passed the evening and night dirty at home!),
6. drying oneself using single use towels rather than bath towels that may not be washed for a week,
7. high interpersonal distance,
8. boiled sweets (candy) provided at customer service locations partly to reduce customer coughing,
9. generally lots of cleaning and sweeping by everyone from school children to monks,
10. food wrapping or the lack of unwrapped food sales, polythene bagging of unwrapped foods such as fruit at the checkout,
11. non-food product wrapping so that even if the packaging has been handled purchased products are sterile when unwrapped at home,
12. changing of clothing upon returning to the home and arriving at school (school uniforms are worn only on the way there. Pupils often change to track suits in class),
13. removal of shoes indoors,
14. use of a separate pair of slippers inside toilets,
15. passing things to other people with both hands thus interpersonal maintaining distance,
15. the use of semi disposable gunte cotton gloves by service personnel such as ticket inspectors, taxi drivers and anyone doing a dirty task even at home*,
11. the Japanese housewives' love of aprons which keep their clothes clean,
12. the way that Japanese taxi drivers open taxi doors for passengers so they don't need to touch the door handle**,
13. the predominance of uniforms in any job that may involve even a little dirt such as on any sort of manufacturing industry,
14. preference for the "one room mansion" over shared houses and flats,
15. more vending machines allowing purchases without human interaction,
16. the practice of sterilizing ones mattress (futon) by hanging it out in the sun,
17. taking rubbish home rather than littering or even using (non-existent) public waste bins,
18. plastic fairings along the sides of car windows to allow windows to be open a little refreshing car interior air even when it is pouring with rain,
19. a general preference for fresh air over closed air-conditioned rooms.
20. a preference for new things rather than second hand,
21. a greater belief that "cleanliness is next to godliness" and conversely that sin is a sort of defilement,
22,regarding cleaning is a sort of spiritual practice (that at least teaches the importance of cleanliness),
23. respect paid to homes, temples, martial arts gyms and other spaces with cleaning and bowing and greetings at the entrance to such spaces, emphasising the importance of keeping them in all ways good and pure,
24. traditionally according to Shinto scripture considering (skin) disease to be one of the deadly sins,
25. the integration of hand and mouth washing (chouzu, temizu) into Shinto prayer ritual,
26. shame-culture severity towards mistakes and not things that one does intentionally (infection is generally unintentional caused by a lack of vigilance such as in failing to cover ones mouth when one coughs),
27. the traditional provision of hot hand washing wet towels (oshibori) and disposable chopsticks at restaurants (that remain open even now),
28. individual bowls and chopsticks rather than sharing a common stock of cutlery even within the home,
29. sitting next to partners and friends rather than facing them and enjoying their company side by side (e.g. using counter seats),
30 enjoying the presence of others without feeling the need to keep talking all the time,
31. swallowing ones nasal mucus rather than blowing ones nose,
32. the consumption of many healthy foods. An urban myth has it that natto (rotten soya beans) is preventative but the notion that it may help has been rejected by Japanese specialists. Something about the Japanese diet (which is higher in rice, soy, and) may help. Natto contains a serine protease (nattokinease) which may encourage the production of serine protease inhibitors (serpins) which may block infection, or do the opposite. I am not a doctor.
33. Washlet (and other brand) bidets fitted to toilets keeping coronavirus from wiping hands,
34. the avoidance of touchy feely greetings such as handshakes, hugging and kissing,
35. less petting at least in public and less sex out of courtship and procreation, and a greater use of prophylactic sheaths,
36. a greater use of the seated position by males when urinating (sometimes by order in public toilets) thus avoiding urine on the floor and seat and hand to genital contact (male genitals may act as a fomites and while it is not a Japanese tradition, I have taken to washing my hands before and after using the toilet),
37. washing ones hands inside toilet cubicles using a raised flush-cistern faucet/spigot or tiny sinks before touching the toilet door handle,
38. the provision of disposable paper toilet seat covers and or disinfectant for cleaning toilet seats in public toilets,
39. spitting is unacceptable,
40. flatulence is beyond the pale,
41. drinking green tea and various medicinal teas,
42. perhaps the practice of getting neck deep in clean hot baths (Japanese wash before soaking) almost every night,
43. the use of hot spas as a folk treatment for almost everything.

The last two would be my Japan-influenced suggestions for attempting to treat the virus even in the face of WHO "myth busting", but I am not connected with medicine in any way.

I thought that the Japanese would be especially inclined to catch the coronavirus due to their genetics but Japanese culture proved me wrong.

I hope and pray that everyone worldwide stays safe. When Japanese schools reopen in April, the Japanese may face a resurgence of the coronavirus, so, I am praying for Japan too. Perhaps prayer should be added to the list of hygienic behaviours. Many Japanese people pray in the face of adversity (kamidanomi) even if they do not believe in the existence of that which they are praying to. This I think promotes awareness of the strength of ones yearning, and lack of ones power, thereby promoting a kind of humble diligence, hopefully.

The above inaccurate image was drawn freehand by me based on an accurate graph in the New York times.

*One hygiene product that I felt to be lacking Japan is the (Great British!) nail-brush. Upon reflection, however, I have come to realise that there are few nail brushes in Japan because Japanese would always wear gloves before performing a task that is so dirty as to result in dirt getting behind their nails. Oops.
**I now think back with regret at the number of times I have opened Japanese taxi doors for myself, in an expression of autonomy, as if to say I don't need you to open the door for me, and thereby putting my nasty germ ridden hands on the taxi probably forcing the taxi driver to get out and disinfect the door.