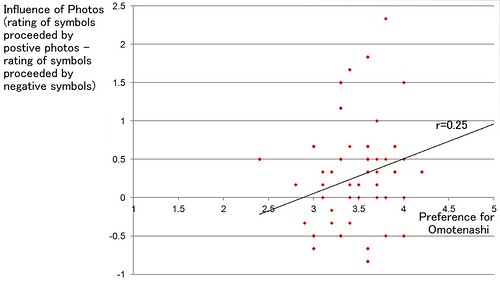 In a typically modest and collectivism-believing fashion, Ikeda (2020, in preparation), a seminar student hypothesised that this type of hospitality is popular in Japan since the Japanese are easily lead, or weak-minded. In order to test this hypothesis we showed students a series of positive and negative pictures (Dan-Glauser & Scherer, 2011) followed by abstract symbol asking them to rate the positivity of latter, measuring the extent they were influenced by the photographs (which they were told to ignore) and asked them the extent to which they enjoyed Japanese style hospitality (omotenashi).

In line with the graduate student's hypothesis, a weak positive correlation (r=0.25) was found between our test of weak-mindedness and the preference for omotenashi as shown in the graph above.The horizontal axis shows preference for omotenashi, whereas the vertical axis shows the extent to which abstracted symbols were rated as having the same valence as the photographs which proceeded them.

[I think that this is a very negative way of seeing Japanese hospitality which is rather motivated by trust in hosts, a desire to allow others (hosts) to be individuals and to express their individualism, a lack of desire to hear themselves think or speak, a preference for and belief in the efficacy of non verbal communication, and enjoyment of and tolerance to surprise and the unusual, and a lack of a hatred of the influence of others. I may attempt to test these other hypotheses in future research.]