The Japanese Octopus Pot Runneth Over 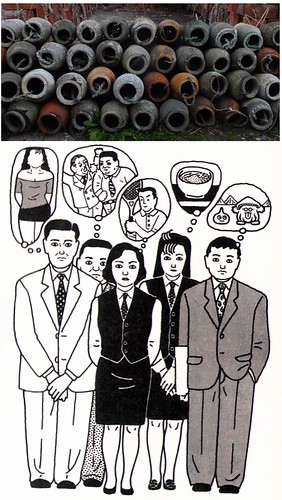 Masao Murayama's theory of the "octopus society" (MacFarlane, 2010) claims that Japanese society is like a lot of octopus pots (image above bottom cropped from wikimedia). Octopus pots are traps for Octopi. The Octopus crawls into the trap and thinks it is safe inside a hole in the seabed but in fact it is pulled up by a string. The Japanese are trapped within their pots which represent their minds, which are also claimed to be empty, lacking a centre. MacFarlane (2010, p78) paraphrases a Japanese source as saying "Our friend seemed to be saying the he imagined that westerners feel filled at the centre with an individual soul and personality, while a single Japanese is like an empty room," and Fukuzawa similarly as claiming ": 'The millions of Japanese at that time were closed up inside millions of individual boxes. They were separated from one another by walls with little room to move around (ibid).' A similar "empty centre," theory is espoused by the late great Jungian psychologist of Japanese mythology, Hayao Kawai (河合, 1982). Kawai seems to have forgotten about the mirror which the book of Japanese mythology claims is the heart of the Japanese (The Kojiki Preface).

These octopus pot, empty centre theories are the opinions of Japanese word merchants like Fukuzawa. As previously mentioned, the Japanese tradition was not to care "a hair on their heads" about such hot air. The Japanese care about "the warehouse of their acts" (Kai)">, or as far as they are yet to be completed, their dreams (as expressed by the picture by Michio Hisauchi, showing Japanese standing in an elevator in Ishihara, 2006, p53). Empty of words they have been demonstrated to be (Kim, 2002) but in my view the Japanese heart may lack a centre (who needs one?) and is not trapped, but runneth over with images and dreams (Takemoto, 2003).