Cruel Manga on the Rise 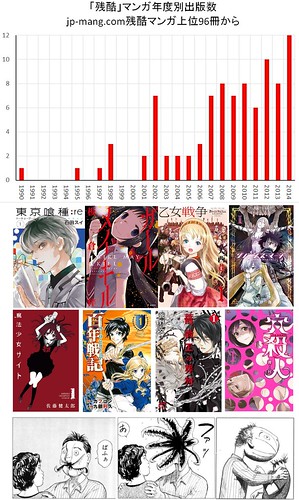 While the level of homicide (and youth crime) has been decreasing in Japan, it seems to me that there has been a contemporaneous increase in the number of violent Manga published.

The image above shows the number of "cruel" (残酷) manga published in each year based on a ranking of the same at jp-manga.com (link givenin bibliography). Parasyte (『寄生虫』) (1990) is the first published, tops the ranking and is reviewed below.

Before trailing off in 2015 and 2016 (possibly because the most recent manga have yet to develop a following) the numbers of cruel manga published increases to reach a peak in 2014 with such titles as "Tokyo Gu-ru:re" (東京グール:re about cannibals in Tokyo), "Girl May Kill" (ガール・メイ・キル about a cute looking assassin with a knife), Virgin Wars (乙女戦争 about 15th warrior girl in Bohemia), "Gnosis March" (グノーシス・マーチ about vampires), Magic Girl Site (魔法少女サイト about a girl that makes a pact with an evil web site）, "One Hundred Years War" (百年戦争 about siblings, a brother and sister, forced to become mercenaries on opposing side of the titular war), "Funeral Procession of the Rose King" (薔薇王の葬列 about a hermaphrodite in the English Wars of the Roses), Hole Murderer (穴殺人 about someone who looks through a hole in a wall at the girl next door to find that she is a serial killer) and more, some of which are cruel in love rather than violence. The "violence" tag at the same website in a subset of the Yakuza genre rather than about violence in general. Some of the reason for the rise in the number of cruel manga in this ranking will be due to the fact that the site's viewers will be those reading manga now and thus more familiar with manga published recently.

I can't comment on how "cruel" most of these manga are since I have not read them. I can vouch for the fact that "Parasyte" (Iwaaki, 1990), The only manga in the above list that I have read, contained some pretty gruesome violence, cruelty. The violence often takes between men and women in scenes where alien parasites bite the heads off their date or spouse (as shown in the bottom row in black and white above). Alien parasite worms invade and grow to replaced the heads of their victims, who became headless bodies for a morphing, carnivorous Sphinx-head. The hero of the manga is a boy whose is invaded by an emotionless, ultra-rational parasite who only invades the boy's right hand, and acts as his assistant in dispatching the hand's head-invading brethren. The boy spends a lot of his time speaking to his hand. In the sense that he is spoken rather than seen by his paracyte, the hero is rather like a Westerner in Japan.

The violence in "Parasyte" was both graphic and particularly cruel due to the way in which the victims were often killed by a member of the opposite sex who they assumed loved them the most. The murderous opposite-sex partner (sibling, girl next door) trope seems to be continued in a more than one of the other seven manga listed.

Another review of Parasyte is here.

Should anyone wish that I cease and desist please be so kind as to contact me via the comments below or the mail link at nihonbunka.com. お取り下げご希望の場合は下記のコメント欄か、http://nihonbunka.comで掲示されるメールアドレスにご一筆ください。

Addendum
I can see now how Nietzsche was able to call his "spirit of gravity" a dwarf on his shoulders.