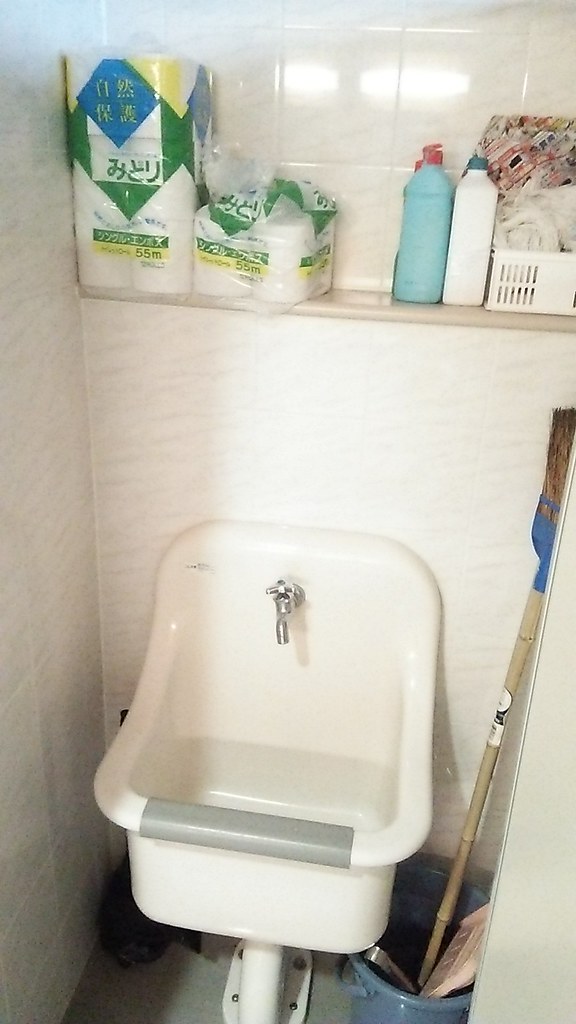 Cleaning Products Unstolen
In many of the toilets in my university there are cupboards about half the size of a toilet cubicle containing cleaning products and utensils and toilet paper, the latter at the very least being of value to to university students. When it comes to thievery, as note by visitors to Japan since the Edo period(Bird, 1880; Cocks & Thompson, 2010; Coleridge, 1872; Golovnin, Rīkord, & Shishkov, 1824; Golovnin & Shishkov, 1819), the Japanese are the mist scrupulous people in the world. 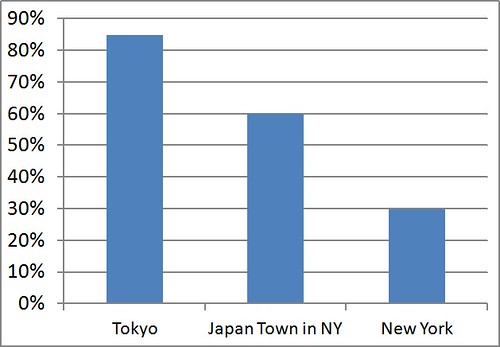 This scrupulousness extends to lost property where research has found that Tokyoites were for instance three times more likely than New Yorkers to return wallets containing money to the police (17 of 20 wallets in Tokyo, 6 of 20 in the Big Apple, see West, 2003 and the image above based upon Table 1, p. 374). Alas Japanese scrupulousness does not necessarily extend to all things, especially on occasion to speech acts which are assessed on their imagined consequences. I wonder if there is a way of creating a phonetic version of the Milgram Lost Letter experiment(Milgram, Mann, & Harter, 1965) to test Japanese verbal integrity.

In any event the Japanese are very kind in all ways towards visitors.

Bibliography (all online)
Bird, I. L. (1880). Unbeaten Tracks in Japan: An Account of Travels in the Interior Including Visits to the Aborigines of Yezo and the Shrines of Nikkô and Isé. J. Murray.
Cocks, R., & Thompson, E. M. (2010). Diary of Richard Cocks, Cape-Merchant in the English Factory in Japan, 1615–1622: With Correspondence. Cambridge: Cambridge University Press.
Coleridge, H. J. (1872). The life and letters of St. Francis Xavier : in two volumes. Asian Educational Services.
Golovnin, V. M., Rīkord, P. Ī., & Shishkov, A. S. (1824). Memoirs of a Captivity in Japan, During the Years 1811, 1812, and 1813: With Observations on the Country and the People. H. Colburn and Company.
Golovnin, V. M., & Shishkov, A. S. (1819). Recollections of Japan: Comprising a Particular Account of the Religion : Language : Government : Laws and Manners of the People : with Observations on the Geography : Climate : Population and Productions of the Country : to which are Pre-fixed Chronological Details of the Rise : Decline : and Renewal of British Commercial Intercourse with that Country.
Milgram, S., Mann, L., & Harter, S. (1965). The Lost-Letter Technique: A Tool of Social Research. Public Opinion Quarterly, 29(3), 437,438. Retrieved from http://www.communicationcache.com/uploads/1/0/8/8/10887248/the_lost-letter_technique-_a_tool_of_social_research.pdf
West, M. D. (2003). Losers: recovering lost property in Japan and the United States. Law & Society Review, 37(2), 369–424. Retrieved from bem.law.ui.ac.id/fhuiguide/uploads/materi/mark-d-west.......