Blowfish (Fugu) is Safer than Skydiving: And Both are Very Safe 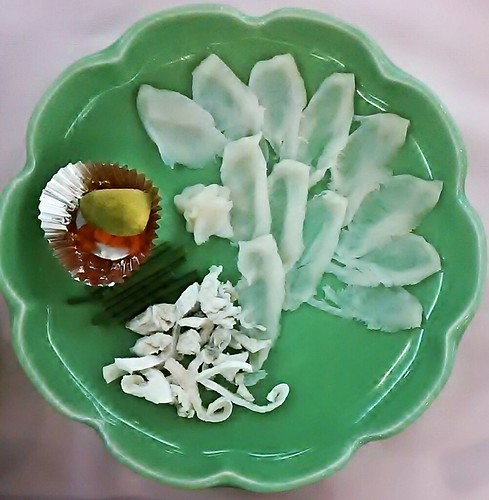 Further, the risk of deaths from eating fugu are even less than that of skydiving. The list below is from the Japanese wikipedia article on fugu, and claims to be comprehensive list of "main" deaths by fugu poisoning since 2000 (perhaps there were others that are not reported). Assuming that there have been 90 million servings a year for the past 14.5 years, or nearly 1300 million servings but only 13 deaths that makes the risk of dying from fugu poisoning to be about one in 100 million. So to compare the death rates, the risk of dying from skydiving according to one estimate is 25/3,000,000 per sky dive. Divided by 1/100,000,000 (my estimation) for the risk of dying as a result of eating a serving of fugu and, I think that we can cross off the millions, so that is 25/3 divided by 1/100. Or about 800. And the wikipedia article also notes that in the ten years from 1995 to 2005 31 people died of fugu poisoning in Japan in similar situations. That is about twice the rate of the 2000s, or 400 times less dangerous than skydiving.

And just as in estimation of the dangers of skydiving where we found that it was experienced, risk-taking skydivers that were dying, similarly, with fugu eating it is those taking risks (preparing, usually self-caught the fish without a licence, and eating the most dangerous parts, the liver or other innards), and not those eating it at fugu restaurants, who are dying.

So skydiving is about 400 to 800 times more dangerous than eating a serving of fugu, but both are very safe activities unless you really try your luck. Indeed, both activities are probably at least in part, enjoyable precisely because one appears to be (but one is not in fact) trying ones luck. This makes skydiving and eating blowfish similar to getting on a roller coaster ride, for thrills.

The Japanese rate themselves as being the most risk averse nation in the world and may only enjoy simulated risks.