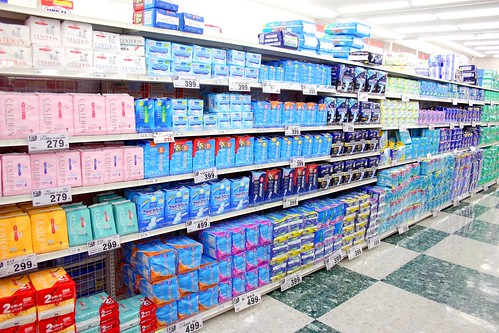 In Japan sanitary towels or "napkins" are tremendously popular in comparison to tampons. The above image and the image at this link show the vast selection of sanitary towels available to the Japanese buying public. On the other hand this image shows the tiny selection of tampons on sale in the same shop. While Japanese tampons are fairly primitive, generally lacking aplicators, Japanese sanitary towels are extremely advanced, thin, absorbent and body-hugging.

Japanese sanitary towels come in different sizes, shapes, thicknesses and for niche markets such as "sanitary towels to wear at night" (see note). Sanitary towels used not to be advertised on television but over the past ten years there has been a proliferation of television adverts showing smiling women walking with large strides, and blue liquid disappearing to leave only white body-shaped cotton pads.

It is not clear why Japanese prefer sanitary towels so much more than tampons. The reverse is the case in the US 70% of women used tampons in 2001 (Kohen). Use of tampons in the US depends upon race. 71% of European, 29% African American, 22% of English-speaking Latina, and only 5% of Spanish-speaking Latina women use them (Romo & Berenson, 2012).

The reasons for this difference can be traced to their history. There was initial reaction against tampons in the West by their association with sex. Bishops in the British House of Lords complained about these "sinful" products, and tampons were required to display a warning that they are not suitable for unmarried women till the 1950s (AHPMA, 2007). Likewise presumably due to the taboos on premarital sex and the importance of maintaining the hymen intact, tampons are less popular in Catholic countries (AHPM, ibid) and Latina women in the USA (Romo & Berenson, 2012).

First of all I think that the lack of popularity of tampons may be related to the lack of popularity of the contraceptive pill compared to condoms. Japan is one of the worlds biggests producers and consumers of condoms, but it was only in the late 1990's, after the legalisation of Viagra, that the contraceptive pill was introduced. Many feminists claimed that it was Japanese men that prevented the contraceptive pill from being legalised. This seems unlikely to me bearing in mind the negative effect they have on male enjoyment of sex, and the positie consequences that condoms have in the protection of women. The lack of use of the pill needs to be explained in other ways.

I think that both the lack of the popularity of the pill and tampons is reflective of the taboo on Women's sexuality (childbirth and menstruation) and sex organs in Japan. Far more than the dreaded phallus (the focus of sexual taboo in the West), in Japan it is women's sex organs that are intrinsically scary and not to be seen, thought, or interfered with.

Upon further reading I find that the first disposable mensturation products, introduced in the 1930 (prior to which women had used reusable cotton undergarments) were tampons. There had been a history of the use of tampons like products among prostitutes in the Edo period which were refered to as "red balls," (akadama) "plugging balls" (komedama) and "packing paper"(tusmegami). Post Meiji, the use of cotton wool became more popular. Then in 1961, Anne Corp released the sanitary towels marketed as a liberation from the discomfort of blocking menstrual flow, using catch copy such as "Sorry to have kept you waiting 40 years," and please call it "Anne Day." Since that time sanitary towels have become far more popular than tampons (Takana, 2003: see Fujisawa, 2008) in Japan. According to a Yunicharm survey (2010) of 10.000 Japanese women, 76% used sanitary napkins, and only 23% tampons (including those who use both). Only 1.2% of Japanese women use only a tampon! A majory of Japanese women feel a psychological "resistance" (teikou) to using tampons, and would not use them even under special circumstances such as when entering a hot spring, pool, or the sea (Yunicharm, 2008: see chart 2).

This vast difference in the use of sanitary products between the US and Japan reflects I believe the different nature of taboos. Mensturation is *relatively* non-taboo in the West, regarded as a "curse," punishment or inconvenience. Sex on the other hand is far more taboo so there was an initial resistance towards the use of "sinful" (AHPM, 2007) tampons due to their association with sex. As taboos became less strict, and mensturation merely an inconvenience, tampons became popular.

In Japan on the other hand birth and menstruation have always been associated with the most severe taboos (Chamberlain, 1882/2005) whereas sex far less so. Chamberlain was unable to translate Shinto mythology into English due to the explicit nature of the descritpions of coitus. Such was the great taboo upon birth and menstruation however, at first Japanese women were required to isolate themselves at the time of childbirth and menstruation in huts on houses (Chamberlain, 2005, p.xxxii). Until 1979 women married to Shinto Priests would isolate themselves from their husbands for the duration of their mensturation (Fujisawa, 2008). This strong taboo required initially that menstruation be blocked. As taboos weaken Japanese women liberated their menstrual flow and moved to sanitary towels, which remain overarching popular. The "resistence" (Yunicham, 2010) felt by Japanese women towards the use of tampons is related to the fact that rather than being a "phallocentric" (Derrida, 2013) culture, Japan is the reverse (wombcentric, fallopocentric) so the taboos and reverence (Freud) for the phallus are directed instread towards women's sex organs, requiring that they be interfered with as little as possible in Japan. The taboo on things feminine in Japan, also explains why so much more Japanese horror, in traditional legend, fiction and cinema, focuses above all upon the monstrous feminine.

The above line of arguement suggests that is the Japanese Women who are behaving irrationally, while Western women are free from irrational taboos. Another possibility may be that while Western tampon manufacturers claim that "A tampon is neither felt during wearing nor does it restrict movement or hinder a woman from engaging in any sporting activities" (Edana, 2006), tampons may be indeed, as Japanese (Fujisawa, 2008) claim, intrusive and a little uncomfortable to use. Due to the way in which Western society is modeled on the man ("Mankind" see De Beauvoir) and phallocentric, women are encouraged (and internalise the desire) to get in line with men even if that involves some discomfort. In Japan however, the model of the human is I believe the mother, and so demanding that women undergo the discomfort in order to man-up as it were, is neither appropriate or allowed. In Japan men are encouraged, and (and internalise the desire) to get in line with women even to the point of wearing man bras.