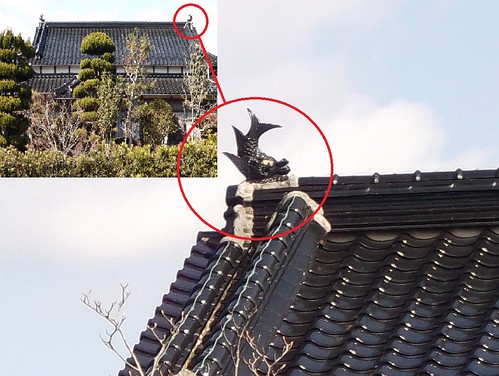 The fish mounted at the ends of Japanese rooves, where the ridge meeds the gable, are in fact a mythical beast called a "tiger fish" (shachihoko) with the body of a carp and the head of a tiger. Should their be a fire the tiger will cause rain to fall, or spit water from its mouth to put it out.

These days they are made of ceramic or cement and some are guilded. The largest roof top tiger fish, on a temple, is over 2 metres tall.

I see that Japanese rooves are teaming with fish symbols. There are also the fish gable end ornaments, just below the peak called "cast fish" (gegyo 懸魚), and Skipjack tuna poles (Katsuogi 鰹木) pointing upwards from the ends of shrine and temple gable peaks. The "cast fish"gable ornaments, were, like the tiger fish a form of sympathetic magic to encourage water to fall or be cast upon rooves in the event of fire. It is claimed that the skipjack tuna poles （katsuogi) on shrine rooves were an architectural reinforcement that merely resembled skipjack tuna.

Sympathetic magical thinking - that like attracts like - is popular in Japan. For example guests not meant to mention "parting" or "returning" at Japanese weddings since the utterance of these words is said to encourage the parting of the couple or returning (to the parental home) of the bride. So I do not doubt that part of the reason for these various types of fish being on Japanese rooves is by their association with water, which occupants hope would put out fire.

However, I think that I also once heard a theory that the shape of Japanese shrine rooves was related to their having originally been made by overturned boats. That may be related to the presence of water barfing tiger-fish on their ridges.