Which image did You / Your Opponent See 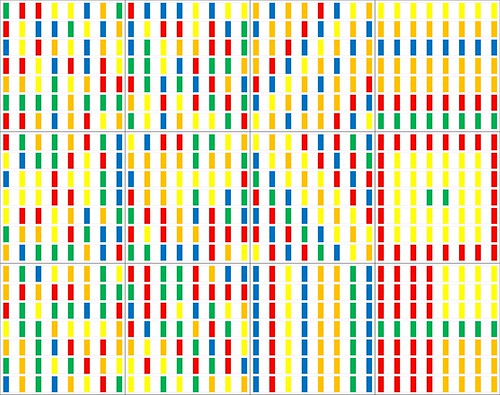 However, in my view, the Japanese do have a desire to look better, see themselves as cuter than everyone else (Google ”自分が一番かわいい” jibun ga ichiban kawaii). In order to test this perhaps one could ask Japanese to complete the same test asking the difference in number of say red and blue rectangles, regarding images containing both random and regular patterns of coloured rectangles.

Then one could ask about a series which is in fact different, "Did you, or your partner see this image?" While disguised as a memory test, it would be asking who got the easy task. I hypothesise that Japanese would be more inclined to attribute the easy image (those on the right above) to their partner, and the difficult image (those on the left above) especially when told that the are told that their opponent did better, but I am not sure.

Another problem is that the patterned images are easier to remember than the random images so if different then all subjects would be inclined to attribute them to the partner. So therefore, the patterned images could be the same as those presented to the subject. In other words, in order to visually self-enhance subjects would be required to attribute an easy image to their partner which they had in fact themselves seen. I think that the Japanese may be so visually self-enhancing that they may do this.