Atractive Asian Girl and The cultural psychology of the concept of Self. 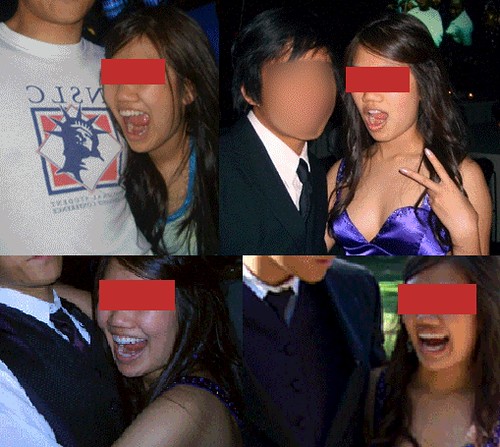 There is an Internet meme that has been doing the rounds for several years featuring pictures an attractive Asian girl who often appears with the same open-mouthed expression in a large number of photos. She has been ridiculed and called lots of offensive names (google) , merely because she chooses to take this pose in several photographs.

It seems clear to me that this attractive Asian young lady has simply decided that she likes this pose, that she looks good doing, and that it expresses her character. So why shouldn't she use the same pose in any or even all the photos that she appears in?

My parents in law are active tourists. The have visited the Pyramids in Egypt, Marble Arch in London, Leeds Castle in Kent, the Rocky Mountains USA, and various locations in Asian. At all of these locations they take a souvenir photograph of themselves, superimposed upon the location, which the same expression, and posing in the neutral, dignified way. Only in one photo that I have seen is even their order reversed: except in one photo in their extensive souvenir travel photo album, my father in law stands on the right.

In some cultures, including Japan, where people are more identified with their self image, people like to present a positive and self-consisistent image of self. For them, visual self-consistency is important.

In other cultures, it is important to present an unchanging narrative of self. Kanagawa, Markus and Cross (2001) demonstrated that when Japanese are asked "Who are you" by a friend, in a group situation, by a teacher, and on their own, their self representations change with the social situation. Presumably they anticipate that each interlocutor seeks different information, and they have no desire to present a consistent (or enhanced) narrative self (Leuers [Takemoto], & Sonoda, 1999). Americans on the other hand, were inclined to narrate themselves in almost exactly the same no matter who is asking, and even when they are on their own, since (like the Asian lady in the above photo) they are concerned to present a consistent and attractive linguistic representation of self.

This is due to the nature of their Gods (super addressees, imaginary friends, hidden intra-psychic others). In the West God is always listening, in Japan God (お天道さま, or the ancestors) are always watching and protecting (見守っている).

Should anyone wish the above photo to be taken down, please leave a comment.
お取り下げご希望の場合は下記のコメント欄か、http://nihonbunka.comで掲示されるメールアドレスにご一筆ください。