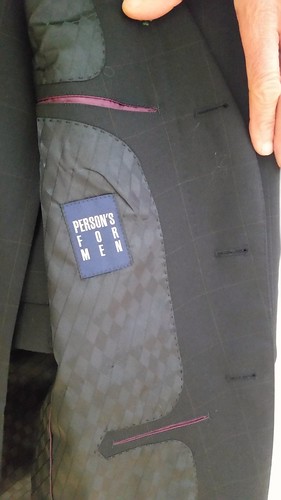 Today is International Women's day but I think it should be men's day in Japan due to the gender reversal pertaining in Japanese culture, including the culture of business suits, which exhibit Simone De Beavouir's theory of "The Second Sex" (1946) in reverse.

Simone De Beauvoir (1946) argued that, bearing mind in the teachings of Western religions, and such facts as that W ”l'homme" (man, mankind) refers to humans in general, the default, standard, archetypal, role model in Western society is male, whereas women are considered to be an inferior second or secondary sex.

Further, as shown in the above image, The main brand (by varieties of suit) of Aoyama one of the two the largest Japanese high street suit store (the other is Haruyama, the equivalents of Moss Bros and Burton in the UK) the majority of whose customers are men, is "Person's" for Men" where "Person's" is a brand of suit for women. The same company also sells two other (Mr. Junko think "Mr. Jane", and Yuki Torii Homme) similarly branded suits for men, whereas there are no such branded suits (XYZ for Women) in the Aoyama women suit range, nor any "XYZ for Men" in the Moss Bros or Burton suit brands.

This is probably due to the fact that Japanese women would not be seen dead in a man's suit, whereas Japanese men, respecting as they do the taste and style of women, are happy to wear a men's version of a "Person's" women's suit, because in Japan the default, model, archetypal role model, of the caring, sharing, autoscopic Jperson is a woman, as is the head of the Japanese pantheon is the Sun Goddess not the Father in Heaven.

Since the most important place in Japanese society is the home, where men generally play second fiddle, and increasingly outside of the home, women are being encouraged to take leading role as well, JMen's Day is likely to be a long time in coming.