Idiotropic and Visual Judgements of Up 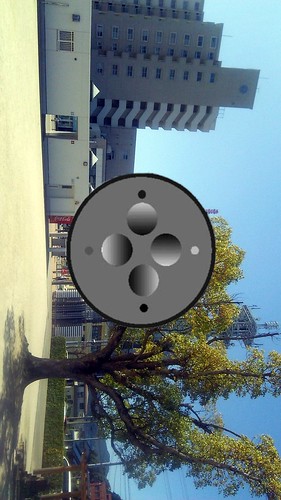 First enlarge the image so that it fills up most of your screen, and then answer the question, which of the four partially illuminated grey disks appears to be the most convex?

Humans tend to feel that light comes from above: the "up" direction as it does in daylight. The direction of illumination is one of the many ways in which humans orientate the up and down in their world. One of the reasons why people may have the illusion that passenger aeroplanes are flying upside down at night, when the ceiling lights are off, is because the only light comes from emergency lights in the floor.

In the above diagram the four partially "illuminated" grey disks will appear to be convex if their shading is felt to correspond to the natural downward direction of illumination. People who judge "up" "idiotropically" (Oman, 2003) based upon what they know to be up from the gravitational sensors in their ears and pressure on the skin, and narratival memory of which way was up before they started looking at the picture, will feel the uppermost disk to be most convex, whereas those that base their judgement of "up" upon the surrounding visual information (the park scene in the background) will feel that the lowest disk is the more convex, with analogue variation between the two.