The Authenticopiable and the Unique 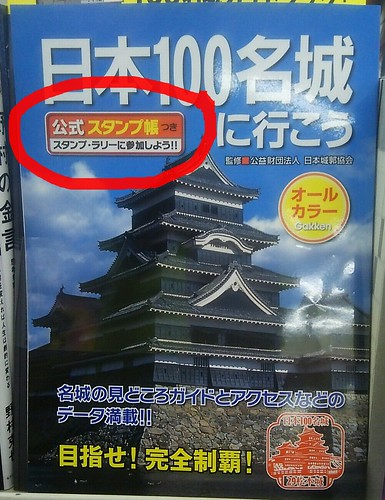 Many Japanese castles, such as those in Oosaka and Nagoya are, like the "foreign villages" (gaikokumura) scattered around Japan, scale models, replicas or fakes, made out of concrete, not the real ting at all, to the Western whispering mind. To the Japanese if they look the same they are the same. The Japanese are going to collect the unique words as stamps. This guide book to the 100 famouse ("named-") castles of Japan contains an "official" stamp collection book. An example of a stamp is shown in red bottom right. To us the situation is reversed: words are the same whereever they are said, but views are unique so we go to see them. How can the world be so inverted?

Each construal depends simply upon whether from out of that cave or 'crypt' of the mind (Abrahama & Torok, 2005), one is looking or listening with 'mother.' For the Japanese the collectable names are on the outside of the head. There is no Other (Lacan, Mori, 1999, p.163) to authenticate them.