The Japanese think they are just being Collectivist 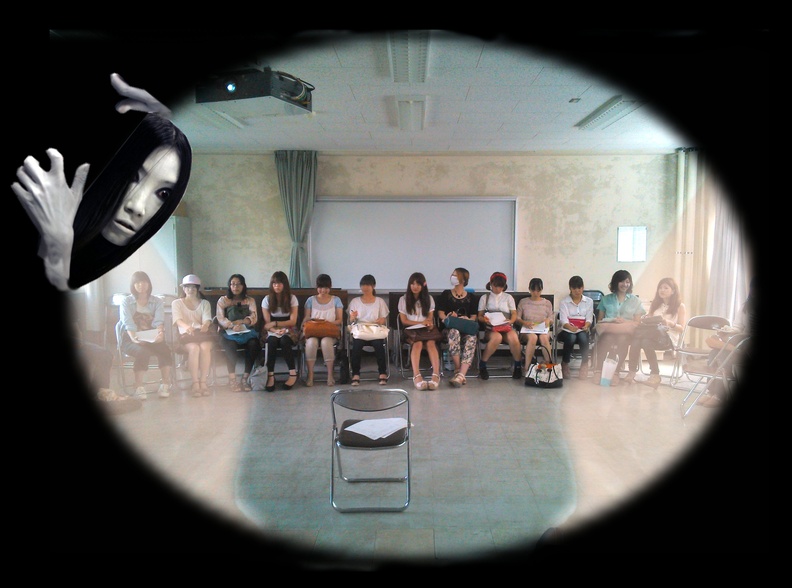 The Japanese think that they are being collectivist but there is one simulated autoscopic gaze whose x-ray eyes they can cannot meet. Likewise, we Westerners think that we are only speaking to ourselves and our absent friends but there is one ear that we ignore. Paraphrasing Archimedes, "Give me a place to stand on, and I will make the Earth." Just one subject position hidden: that is all it takes to believe in a visual, or verbal (Kantian, ideal) world.

The need to hide the superaddressee is the reason why Westerners think they are individualists and Japanese think that they are collectivists. The horrific other can be hidden, as well as by being horrific, in one of two ways.

If the superaddressee is an ear then it can't be hidden publicly since one would need to go around talking out loud all the time. This is what children do at first (c.f. Vygotsky) but the content of the chanting that they do is too weird for them to keep doing it out loud. Once they start doing it quietly it does not take long before they think that they are talking purely and simply to themselves (but as Vygotsky demonstrates, children still in the talking out loud stage give up if put in a room full of foreign language speakers). Since we Westerners kid ourselves that we are talking only to ourselves, we claim that we are individualists. Individualism is a lie that helps keep the sin, that is so horrific, hidden.

If the superaddressee is an eye, then it emphasises its own duality be requiring space, or a gap, between the see-er and seen. The way that phonemes require a temporal gap is less obvious. Westerners imaging that it is possible to understand the living word in mind even as it is spoken in immediate "presence." To hide their sin, which is not nearly so disgusting since the superaddressee is less passive, the Japanese claim that they only care about the eyes of others. This allows them to forget that they are posturing to vast and scary Starman, or sun goddess. While, however, individualism is a lie since meaning is always transitive, it is in fact possible to be collectivist. In this situation the Japanese mirror is clean; the abject feminine can be washed from it. For this reason I believe, it may be necessary to be born again, as a Japanese, in the sense of someone who lives in the light, in order to be saved from the beast!

Kayako Saeki pictured above, always looks like she is trying to get out of the image, because like Sadako, she is. Furthermore she is not really modelled as a member of the crowd, with a face that can be seen from the front, but rather as or in the boundary of experience: the first person view of the subject. The Japanese, I believe, look out of her eyes. She is especially difficult to see because East Asians have smaller, invisible, noses like Gachapin!