Better or Worse, Believe it or Not 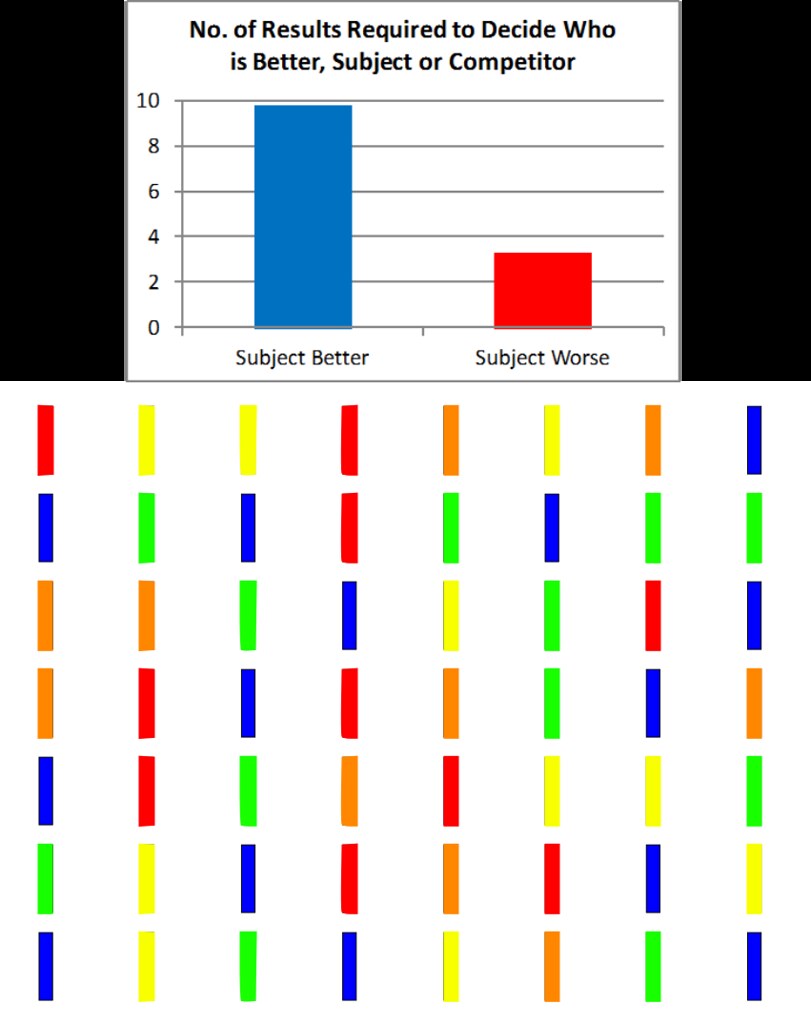 In Takata's 1987 study, Japanese subjects were shown 20 different grids of coloured rectangular boxes like that in the bottom half of the image above, and asked questions such as "what is the difference in number in red and blue rectangles," being given 13 seconds to given an answer. At the end of the test, they were shown their own results compared to a bogus competitors results. They were then asked to decide who is better at the test you (the subject) or the competitor. When the bogus test results showed that the competitor was better, they needed only on average 3.3 comparisons before deciding that their competitor was better than them. When on the other hand the bogus competitor is on average worse, then (in the same high a variance condition) they needed on average 9.8 test results before coming to the conclusion that they are better than their opponent. The reverse trend is found among North Americans (Heine, Takata, & Lehman, 2000), who need less data to come to the conclusion that they are better than an opponent. This is deemed to be a behavioural demonstration of Japanese self-critical, western self-enhancing tendencies, since the dependent variable is how much data they asked to be shown. At the same time, the self-presentation "He is better than me" or "He is worse than me" is entirely linguistic. Takata, T. (1987). Self-Deprecative Tendencies in Self Evaluation Through Social Comparison. The Japanese Journal of Experimental Social Psychology, 27(1), 27–36. doi:10.2130/jjesp.27.27 Heine, S. J., Takata, T., & Lehman, D. R. (2000). Beyond self-presentation: Evidence for self-criticism among Japanese. Personality and Social Psychology Bulletin, 26(1), 71–78. http://flic.kr/p/qvbWJB