The Only Symbolic Self Assertion in Japan 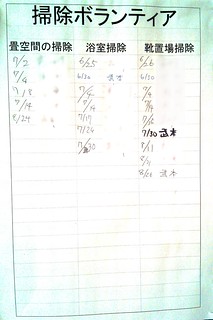 (Cleaning Volunteer Chart)
In general the Japanese do not tend to assert themselves linguistically, being in general very self-effacing. There is one exception to this. Japanese people, and pocket monsters, take great pride in their names, and will put their names to themselves and their positive acts. Despite being so self-effacing, when it comes to their names, they are very in your face.

For example individual names appear on houses (where Britons have only numbers), stating the name of the patriarch who provided for it, at Shinto shrines the names of companies and individuals that donate lanterns and other stonework will be carved into the same, Japanese sometimes stick labels with their names onto temples and shrines in the "senja fuda" tradition, Japanese school-rooms are often bristling with student names, they take great pride in their business cards, and in this photo, they and I write their name in a chart detailing who has cleaned what part of the changing room when. I have left only my name showing. "Take Take, Takemoto (said in the style of Pikachuu)!"

I think that the Japanese name may be the equivalent of the Western smile. In general Westerners do not assert ourselves visually, with our bodies, poses and posture. To do so would be considered vain. On the other hand we are allowed to smile. The smile -- being the shape of the mouth and source of language - the most linguistic of visual expressions, the written name is the most visual mark in language, the point of intersection between the worlds of language and vision, the tip of the brush pen.

Comments:
Thought-provoking as always, Timothy. My own take on the matter is similar to Alex Kerr in Dogs and Demons, namely that Japanese love the idea of nature but not actual nature. Hence the single flower in the tokonoma. They also strive for control in a country that is one of the most prone to disasters in the world. Hence the desperate urge to concrete over everything. Added to this is that nature in Japan is nice to look at (mountain peaks, autumn colours, spring blossom) but horrible to be in - snakes, mukade, mosquitoes, bears, horrible insects. You can lie on the grass all night in England and feel at one with nature; you'd think twice before doing that in Japan.

Hi John.
Honoured that you are amongst my readership but, I think that you read me on some BBC blog rather than hear since that is where I wrote about nature recently. I think that Alex Kerr is right. I have dogs and demons but I did not get to that part. I will find him and quote him. As you say, it could be due to the nature of the nature itself. I used to bat hornets away with the palm of my hand before I realised that they can kill.