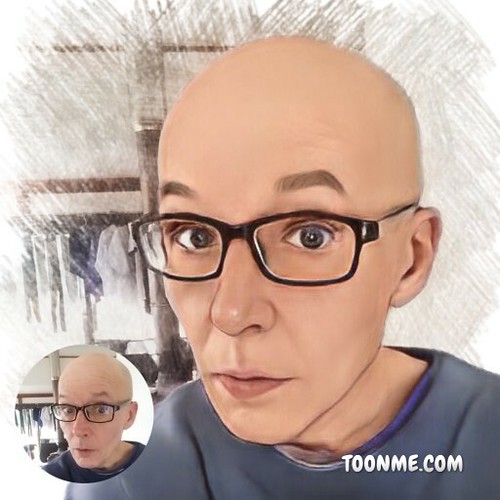 I look nothing like this of course. The selfie photograph was processed with some smoothing algorithm, even before the cartoon application redrew me as a 30 something and really thin, when in fact I have spare tire.

This what I think replaces Western "self-esteem" (verbal self aggrandisement) among Japanese. When the Japanese imagine themselves, they imagine someone along these lines, far younger, cuter, and more attractive than they are because the Japanese love themselves too.

While I was taught to think that "narcissism," which is used to refer to both excessive self-agrandisement and visual (in the sense above) self aggrandisement, is both stupid and unpleasant, I think it has advantages.

2) It does not require "negativity" (Saussure) nor even comparison. I can stare at my selfie, in the mirror, of my mind, though I am the only person in the world. But to do the same in words entails, implicitly or explicitly that I compare myself with others, and whisper not only my positivity but also my superiority.

3) Not only does my toonme (jimanga: Takemoto, 2017) not involve "negativity," trashing someone else, but it also often involves basking in reflected glory, or spreading the toon. I take a selfie, with my camera, mirror, or my minds eye with someone or something else, because I am proud of myself and person or thing that I am two-shotting with. Our visual selfie representations are contained within a field, within which the halo-effect glows big-time.

4) Falling in love with ones image does not only imply tooning (falsifying ones self image) but also leads to a greater desire to make the reality match the toon. If, like Donald Trump, or Steven Fry, you can and do, blow your own trumpet, your obesity unimportant. On the other hand, though the Japanese linguistically rate their health the lowest of OECD nations, Japanese are the least obese OECD nation in the world, and the nation with the highest longevity.

5) For the same reason as (3), the located nature of vision, including autoscopy, requires that I take into account my environment. No one can preen themselves in a pool of detritus, nor take cheerful selfies in an apocalypse. The whisperers on the other hand, can, will, and even should keep whispering themselves to rational, logical, self-serving oblivion (Hardin, 1968*).

Toonme Selfie's could save the world, if it were not for the fact that with such nastiness as SDGs, linguistic self enhancement is being promoted on a global scale.

*Hardin, rational homo-narans that he was, explicitly denies the thesis presented here as follows
In passing, it is worth noting that the morality of an act cannot be determined from a photograph. One does not know whether a man killing an elephant or setting flre to the grassland is harming others until one knows the total system in which his act appears. "One picture is worth a thousand words," said an ancient Chinese; but it may take 10,000 words to validate it. It is as tempting to ecologists as it is to reformers in general to try to persuade others by way of the photographic shortcut. But the essense of an argument cannot be photo-graphed: it must be presented rationally -in words (Hardin, 1968, p. 1245)