Activity Foods and Autonomy in the Matrivisual 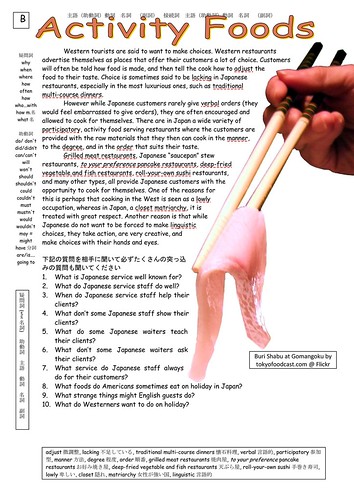 There is a common misconception that the Japanese are sheep, lacking in autonomy, and creativity compared to Westerners. This is due to logocentricism - the tendency to over-emphasise the importance of words. Westerners are loud, autonomous, and creative with their words, whereas Japanese tend to follow Benjamin Franklin's advice to, “speak little, do much.” Nowhere perhaps is this difference more pronounced than in food preparation services where, to some extent similar to Meg Ryan in When Harry Met Sally, Westerners like to read menus, give orders, and have others adjust their food to their liking. The Japanese on the other hand would not be so outspoken as to order others around (as they hate to be ordered around themselves) but will delight in being given the opportunity to cook, and choose how they cook, for themselves. The cultural difference is not in the degree of autonomy nor creativity, but in the modality of self-expression.