Will Jim be Helpful? 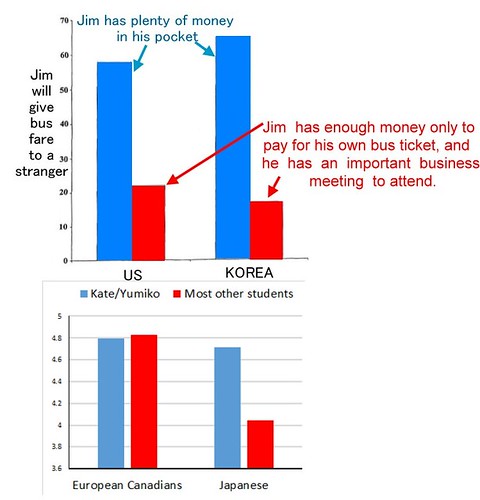 Choi, Nisbett, and Norenzayan (1999) that when Americans and Korean's were asked whether an individual, "Jim", would help a stranger in the situation where Jim either has plenty of money in his pocket, or where Jim has money only enough for his own fare and an important meeting to go to, the Koreans were found to be more influenced by the situation as in the above graph (based upon Choi, Nisbett, & Norenzayan, 1999, fig. 1. p. 52). It is argued that Asians are more contextual basing their decisions, and predictions of other's decisions, upon the context of the action rather than the character of the individual.

The experimental evidence is persuasive, and it fits in with stereotypes of East Asian "collectivists", lacking gumption, blown by the winds of societal, and contextual pressure.

At the same time, there is something wrong with this picture. Firstly I find that Koreans and Japanese are notably helpful, and non violent, to strangers across situations rather than showing behavioural swings, the helpful to mean, as shown in the graph above.

I suspect that there is another reason why the Koreans are being more "context" sensitive and that is that they are given no information about Jim other than his name. If the Koreans were given an equal amount of information regarding Jim, such as "Jim is a suited 25 year old business man working for a provincial bank", say, then the they would have been no more swayed by the context than the Americans because they, like the Japanese, base their decisions upon what they can imagine, animating the visio-imaginable rather than the phoneme "Jim".

In support of this hypothesis in other research it was found that when given a little more information ‘‘Kate (Yumiko in Japanese) age 20, is a student at your university," (Hamamura, Heine, & Takemoto, 2007, p.250) was given to Japanese and Canadian students, it was the Japanese and not the Canadians that gave a more outlier - further from "most other students" - appraisal of ‘Kat/Yumiko's personality (graph above bottom, based on Hamamura, Heine, & Takemoto, table 1). This difference was significant (p<.001). This is because, I believe, in this experiment the subjects were not just given a name, but also some information upon which to imagine the person that they were appraising.