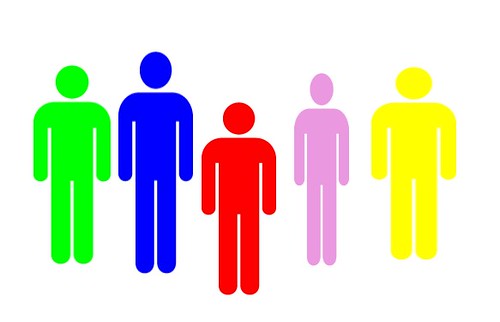 Why is that Japanese groups are so varied? At the earliest level groups are made of members made of different foodstuffs, and then soon in super-sentai (power ranger) and PreCure groups contain members coded with different primary colours. In Manga there are usually groups formed of people with disparate sizes, characters, and even colours of their hair. Yowamushi Pedal, the manga about cycling, contains a red head, a blond and a guy with green hair. Slam Dunk, like most super sentai groups, chose to focus upon a red hero. Japanese boy bands are formed by their managers with members with disparate appearances and characters. There is usually an especially handsome one, a sporty member, a macho member, and a mixture of other types such as withdrawn, effete, and jokey (this characteristic may be shared by famous Western boy bands too).

Yuki (2003) explains the cultural difference primarily using the concept of social identity (Tajfel, 1982). Western groups are formed and cohere by virtue of their effect upon the self esteem of their members. The more similar the group is, the more the members will bolster each other's ego by noting and praising this similarity, and slagging off (the psychological jargon is downwards comparison) other groups. "We Brits are rational, level headed, gentlemen. Those XYZ are temperamental, hot-headed, rogues." The enjoyment of pride as motivation for group membership and cohesion, Yuki argues, assimilates and unifies Western groups towards central group ideals. Japanese groups are not, we are told, formed for this "Good-Us Bad-Them" ego-massage-purpose so they are not so uniform.

Yuki also seems to suggest that there is a further opposite tendency to be disparate due to the way in which Japanese group members depend upon each other, in which mutual help network, group membership diversity leads to greater synergy and mutual assistance benefits.

I was convinced by Yuki's explanation. However, this year, a final year student (Egawa, 2015) has demonstrated a strong positive correlation between similarity and perceived helpableness. Whatever the economic truth of the situation, as Plato argued in his Symposium, we, or at least Japanese students, feel we can help someone who shares our goals and ambitions more than someone disparate: even our other half.

So why then are Japanese groups so diverse to the point of being multi-coloured? I suggest that it is for the same reason that Western groups are similar -- ego massage -- except as always, the difference is in the modality, and the way that modality is enhanced. If groups are, like Western egos, narrated then they are enhanced by the value and superiority of their central attributes compared to those of other groups. But if groups are something that are seen and imagined then outgroups are absent, and groups simply look better if they contain a certain amount of diversity, since diversity makes the members conspicuous, stand out, or in Japanese, "hikitatsu." Colours are nowhere more beautiful than alongside other colours, such as in a rainbow.