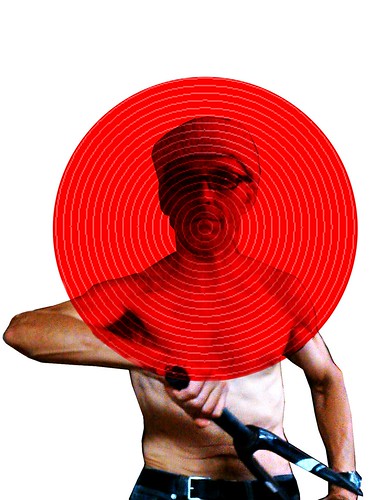 I have got rather flabby again but I have been re-inspired by Yukio Mishima who, like me, would move from the world of words t to the world of the Sun. He attempted to achieve this dream by pumping weights and sword fighting, hence the steel in the title of his book: Sun and Steel. I pump my carbon bicycle, less effectively, but in the light of the sun.

Mishima felt however that he would have to die to achieve this aim, hence his ritual suicide. This belief this is perhaps not an uncommon presumption. Pure Land Buddhists for example believe that they will be born again in the pure land, of light, upon their death.

Mishima writes, in "Sun and Steel," almost in the manner of a Westerner, who yet knows his fate is to reject words and become, or return to being, Japanese.

Mishima seems to have trouble believing in reflexivity in any other media but words. This is quite normal in the Western tradition. Mead for example claimed that autoscopy is only possible through the use of a mirror. But Mishima should also have known of Zeami and the eye apart (離見の見）, or that martial artists create for themselves an opponent from whose point of view autoscopy becomes possible. Mishima would not have known of mirror neurons which provide a neurological basis for this capacity, or that people are now argued to auto-spectate all the time. Was Mishima lacking a 'pocket monster', or imaginary friend from whose point of view he should be able to have seen himself? Perhaps he hankered after more individuality than is possible. Was he unaware that the self is always a "gift"?

Further, with regard to his instance that any such gaze would be unable to penetrate the skin was he unaware first of all that a simulated gaze can see through things, as demonstrated by the way in which Japanese are able to generate interior views, and the way in which they pay so much attention to have an so much pride in interiors such as of their houses, their trucks ("maddona"), their cars, and their underwear which sometimes, colourful, came in 12 or more layers. The fact that the Japanese shrine, person and presents are wrapped more than once indicates not only a visual attention to form but also the existence of the X-ray eye of the sky. The Japanese Sun can see through things! Oh, Mishima, didn't you know?

This is an antinomy he claims. An antinomy of self-deception. One may be able to believe that one can see oneself but one can not believe that one can see through ones skin to ones own heart? Then how do words achieve reflexivity, and mean in the darkness? Hadn't he seen what was in here, or read Wittgenstein, or Derrida? Wasn't he aware of the need for the Ear of the Other? If an ear can pass through the skin, in simulation, then how much more easily can the skin become transparent to a simulated gaze.

Moreover the whole notion of inside and outside seems wordy and fraught. Had Mishima not read Nietzsche? The real world is a myth from konigsberg! There is no "other side" of perception. Mishima should have read Nishida and been aware of the claim that heart can see the heart-as-the-world. Was he unaware of the circle of fire, the unity, that the Sun is the Steel, the Chrysanthemum is the Sword?

Mishima had spent too long in the dark with his steel and his words. He was unaware of the Sybil and that she alone does the talking.


Mishima writes
"The subtle contradiction between self-awareness and existence began to trouble me.
I reasoned that if one wants to identify seeing and existing, the nature of the self-awareness, the nature of the self-awareness should be made as centripetal as possible. If only one can direct the eye of self-awareness so intently towards the interior and the self that self-awareness forgets the outer forms of existence, than one can "exist" as surely as the "I" in Amiel's Diary. But this existence is of an odd kind, like a transparent apple whose cores is fully visible from the outside; and the only endorsement of such existence lies in words. It is the classical type of existence experienced by the solitary, humanistic man of letters..."
But one also comes across a type of self-awareness that concerns itself exclusively with the form of things. For this type of self-awareness, the antimony between seeing and existing is decisive, since it involves the question of how the core of the apple can be seen through the ordinary, red, opaque skin, and also how the eye that looks at that gloss red apple from the outside can penetrate into the apple and itself become the core. The apple in this case, moreover, must have a perfectly ordinary existence, its colour a healthy red.
To continue the metaphor, let us picture a single, healthy apple. This apple was not called into existence by words, nor is it possible that the core should be completely visible from the outside like Amiel’s peculiar fruit. The inside of the apple is naturally quite invisible. Thus at the heart of that apple, shut up within the flesh of the fruit, the core lurks in its wan darkness, tremblingly anxious to find some way to reassure itself that it is a perfect apple. The apple certainly exists, but to the core this existence as yet seems inadequate; if words cannot endorse it, then the only way to endorse it is with the eyes. Indeed, for the core the only sure mode of existence is to exist and to see at the same time. There is only one method of solving this contradiction. It is for a knife to be plunged deep into the apple so that it is split open and
the core is exposed to the light—to the same light, that is, as the surface skin. Yet then the existence of the cut apple falls into fragments; the core of the apple sacrifices existence for the sake of seeing.
When I realized that the perfect sense of existence that disintegrated the very next moment could only be endorsed by muscle, and not by words, I was already personally enduring the fate that befell the apple. Admittedly, I could see my own muscles in the mirror. Yet seeing alone was not enough to bring me into contact with the basic roots of my sense of existence, and an immeasurable distance remained between me and the euphoric sense of pure being.Unless I rapidly closed that distance, there was little hope of bringing that sense of existence to life again. In other words, the self-awareness that I staked on muscles could not be satisfied with the darkness of the pallid flesh pressing about it as an endorsement of its existence, but, like the blind core of the apple, was driven to crave certain proof of its existence so fiercely that it was bound, sooner or later, to destroy that existence. Oh, the fierce longing simply to see, without words!
The eye of self-awareness, used as it is to keeping a watch on the invisible self in an essentially centripetal fashion and via the good offices of words, does not place sufficient trust in visible things such as muscles. Inevitably, it addresses the muscles as follows: “I admit you do not seem to be a illusion. But if so, I would like you to show how you function in order to live and move; show me your proper functions and how you fulfill your proper aims.”
Thus the muscles start working in accordance with the demands of self-awareness; but in order to make the action exist unequivocally, a hypothetical enemy outside the muscles is necessary, and for the hypothetical enemy to make certain of its existence it must deal a blow to the realm of the senses fierce enough to silence the querulous complaints of self-awareness. That, precisely, is when the knife of the foe must come cutting into the flesh of the apple—or rather, the body. Blood flows, existence is destroyed, and the shattered senses give existence as a whole its first endorsement, closing the logical gap between seeing and existing... And this is death.
In this way I learned that the momentary, happy sense of existence that I had experienced that summer sunset during my life with the army could be finally endorsed only by death.
All these things, of course, had been foreseen, and I knew too that the basic conditions for this made-to-order type of existence were none other than the “absolute” and the “tragic.” Death began from the time when I set about acquiring an existence other than that of words. For however destructive a garb they might assume, words were deeply bound up with my instinct for survival, were a part of my very life. Was it not, essentially, when I first felt the desire to live that I began for the first time to use words effectively ? It was words that would make me live on until I died a natural death; they were the slow-moving germs of a “sickness unto death.”

Mishima is a Japanese genius, god. It is not appropriate therefore, for a whitey like me to understand him. But at the same time, like many Japanese novelists, (such as Natsume Souseki) he speaks from the boundary of Japanese and Western culture. Reading the above passage it sounds as if he is approaching Japanese culture from the outside. The Japanese quintessence, at least in so far as he is a darling of 'nationalists' and "right wingers," appears to me to be trying to become Japanese.

His musings here above relate to the reflexive power of words and vision. Yeah! This is what I think about all the time. The strange thing is for me that he seems to be more Western that I am.Or rather, that he believes in the Western more than I do.

" If only one can direct the eye of self-awareness so intently towards the interior and the self that self-awareness forgets the outer forms of existence, than one can "exist" as surely as the "I" in Amiel's Diary. But this existence is of an odd kind, like a transparent apple whose cores is fully visible from the outside; and the only endorsement of such existence lies in words. It is the classical type of existence experienced by the solitary, humanistic man of letters..."

Mishima sounds like Mead, or Lacan. What is it about words that allows for reflexivity? I am not Japanese and I can not see myself. But I reject the reflexivity of the word. It less important that "one can not see oneself" but that talking requires a listener so one can not talk oneself either.

Hasn't Mishima read Nietsche or Wittgenstien? Langauge may *seem* to allow for self awareness but this is a lie. There is no private languuage. The narritival self is a dwarf dropping leads drops into the ear of the spirit of gravity.

Thank you for recommending this book.

Addenda
It could be his choice of sports equipment metaphor. Steel becomes molten.Carbon burns. Or surely he knew all this. Yes, i think that Yukio Mishima knew all this.

And while I did not notice any direct assertion in "Sun and Steel" that words are Western, he does seem to be arguing that there are two types of "life," life as words and as cetripetal, autoscopic vision. As such, the "Nacalian self" of this blog (that grows up in reverse from the symbolic to the mirror stage) can be replaced by "Mishiman self," the sunny self that Mishima was aiming for. I like to think he got there.