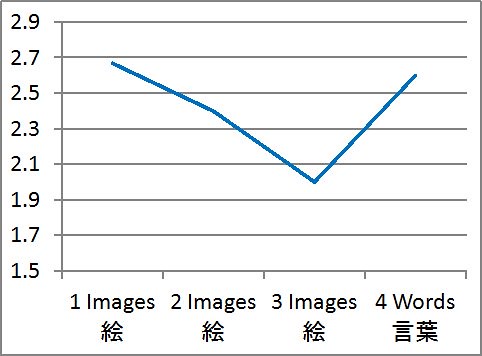 There were only 10 subjects and I did not manage to explain the test too well so three subject did *worse* in the first trial but there was successive proactive inhibition as the subjects were given memory tests on sets of three modes of transport as icons, and a release from proactive inhibition on the forth trial when that fourth trial used words as opposed to icons as used on the previous three trials.

That Westerners gain a release from proactive inhibition when they are shown a fourth trial with pictures, but not a fourth trial with words, following pictures, (Hopkins, et al. 1973) is due to the fact I believe that Westerners will chant (Vygoski) the words for the pictures that they are shown so showing pictures uses up their short term memory for words. Japanese however, as demonstrated by Kim (2002) do not speak to themselves when they are shown visual problems, so when the fourth trial is words (as above) then their short term memory for words is not proactively inhibited.

I also predict the reverse reversal, wherein Japanese will not experience a release from proactive interference when they are presented with a sequence of words to remember followed by pictures because when presented with words they will supply the pictures, "chanting" or rather imagining, or flashing them to their internal-external other.


I wrote all the following before then deleted it by mistake. What follows (who cares!) is a rehash.

There are phenomenological or (proto?) physical limits to self deception. The important point is deception.

But there are ways that one can deceive oneself that seem (to me now) to be governed by almost Kantian "proto-physical" or "phenomenological" imperatives due to the difference between eyes and ears: eyes can be seen but ears can not normally be heard because they do not make sounds.

There are therefore proto-physical, or phenomenological facts that limits the extent, and ways in which one can deceive oneself.

Ears are more passive than gazes since eyes participate in the world of sight, whereas ears are not heard.

Perhaps the grammatological requirement that there be a subject if there is an object is of the same order as the above phenomenological limits to deception.