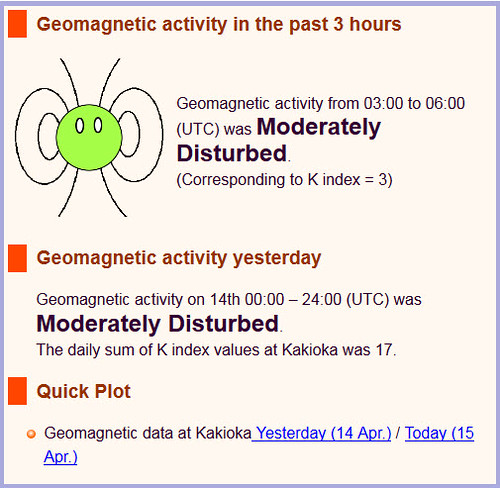 The homepage of the Kakioka Magnetic Observatory shown above says that geomagnetic activity is not a good predictor of earthquakes.

But, what with all the dolphins (Melon Head Whales), 150 of them that washed up on a beach North of Tokyo I was reminded of the brilliant research by Motoji Ikeya, on the way that catfish (thought to cause earthquakes in Japanese legend), oar fish (thought to predict them in Japanese legend) and other sea and land mammals sense the rock crushing piezoelectric activity causing magnetic fields and ionization of the air and can be used to predict earthquakes.

An American company uses the same principle to attempt to predict earthquakes using magnetometers and publishes world wide data (mainly for California and Taiwan) on their Quakefinder web site. However, they do not have any sensors in Japan. QuakeFinder does have a great Google Tech Talk video explaining their quake prediction research.


There appear to be however a few places in Japan that publish electromagnetic activity, particularly the Kakioka Magnetic Observatory in Kakioka north of Tsukuba (i.e. about 100km north of Tokyo). Their main English page shown in the screen shot above says that "Geomagnetic activity from 03:00 to 06:00 (UTC) was Moderately Disturbed." I am not sure if that is near enough to Tokyo to be of any use at all, even if if magnetic activity were of use. The same site offers data from The same site has another page that shows detailed data from four places in Japan
Kakioka About 100km north of Tokyo
Memambetsu (top of Hokkaoido)
Chichijima Island a LONG way south of Tokyo in the Pacific
Kanoya (nr Kagoshima) But I am not sure how to read the plots, and there is no cute graphic (as in the above image) to show whether the readings are high or not.

A Japanese space agency measures "Sporadic E propagation" and has traffic lights indicating the level of activity at four sites in Japan (Hokkaido, Tokyo, Kagoshima and Okinawa). None of them are red right now.

None of these measuring stations are anywhere near me. Perhaps I should look at our pet goldfish, or go to see if the carp in the university pond are jumping out of the water, or arranged in lines. Fish may arrange themselves in lines so as to avoid placing their bodies across the direction of greatest magnetic field, or jump out of the water when the magnetic field becomes unbearable.

Or I could keep a catfish. Americans are blissfully unaware that catfish are earthquake predictors, so when catfish die they think it was something to do with the water despite there being no harm to another water creature. See the mystery that occurred in Texas that preceded earthquakes, and Virginia at about the same time. I am not entirely sure whether it is a good idea to be aware or not but, the late professor Ikeya felt that paying attention to pets and other animals could save lives as explained in his short children's book.


The reason for melon head whales, and other marine mammals beaching, themselves is entirely different and explained on Captain David Williams' excellent website The Truth about Why Whales Strandings. Since, he claims and I believe him, that whale strandings are more to do with sonic seismic events, it is less likely that they would predict imminent earthquakes, but rather the fact that a submarine earthquake has already occurred. He suggests that the recent beachings in Japan are due to there having been a seismic event near Guam about a month ago. However, since seismic events occur in groups, and there were beachings prior to the big Fukushima Tsunami, and whales are linked with earthquakes in North American Mythology, there is that possibility and the connection between abnormal whale activity and earthquakes is common knowledge (see this auto translation) in whaling earthquake prone Japan.