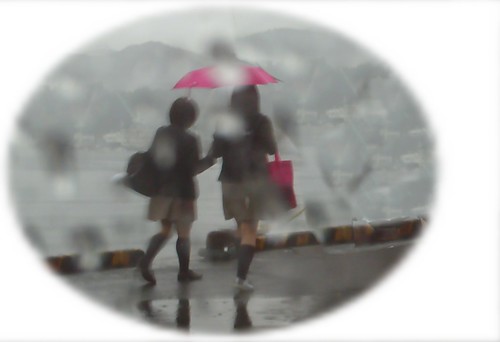 A book of Japanese short verses (Haiku) by a schoolboy has been published recently (Kobayashi, 2013). The haiku that is featured on the cover, and used as the subtitle for the book, is good.

Bullied
I wanted to go but couldn't
Spring rain

The schoolboy poet was bullied at school and stayed at home quite often as a consequence.

As argued in previous posts Haiku poems attemtp to lead the reader to a little bit of Buddhist enlightenment by encouraging them to reach a erroneous interpretation of the poem before returning them to, or hinting at the nature of the poetic experience.

Rain often features in Haiku partly I think because rain can not usually be seen (except in its effects) only inferred. Two other famous haiku by Basho and Buson mention "rain" (encouraging the reading to attempt to imagine it) before admitting that they were in fact looking at a river, or houses on the far side of a river.

Is this schoolboy seeing rain? The poem is effective because it is inconclusive, hinting at another interpretation. School starts in spring in Japan, so one can imagine the schoolboy wanting to go to school but not going because his bullied and his feelings at this his predicament. I think we may imagine him crying. And there arises an alternative interpretation of the "Spring Rain." Is the spring rain the poets tears or not? The reader can imagine that the poet saw a wet spring day, a blurred image trough rain, glass or tears, but the in the face of the absense of a privelidged interpretation, the reader is returned to the uninterpreted image, the purity of the experience itself.